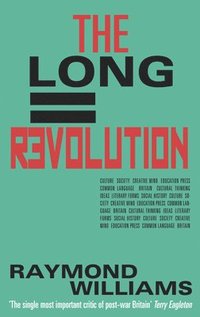 av Raymond Williams
Häftad Engelska, 2011-12-01
179
Köp
Spara som favorit
Skickas inom 5-8 vardagar.
Gratis frakt inom Sverige över 159 kr för privatpersoner.
Finns även som
Visa alla 2 format & utgåvor
Raymond Williams was one of the world's leading cultural critics. With this book, Williams brilliantly documents the exciting birth of the popular press, and explores the growth of the reading public in English-speaking culture in Western Society. The 'Long Revolution' of the title is the third revolution of culture after the democratic revolution and the industrial revolution. Almost uniquely, William's work bridged the divides between aesthetic and socio-economic inquiry, between Marxist thought and mainstream liberal thought, and between the modern and post-modern world. Continuing the theme he began so successfully in Culture and Society, Williams examines the gradual change, which took over our political, economic, and cultural life. He placed special emphasis on the 'creative mind' in relation to social and cultural thinking. After discussing the theory of culture he turns to a fascinating historical study of such institutions as education and the press, traces the development of a common language, and reveals the links between ideas, literary forms, and social history.
Visa hela texten

Raymond Williams was born in the Welsh border village of Pandy in 1921. After the war he began an influential career in education with the Extra Mural Department at Oxford University. His life- long concern with the interface between social development and cultural process marked him out as one of the most perceptive and influential intellectual figures of his generation. His best-known publications include 'Culture and Society' (1958),'The Long Revolution' (1961), 'The Country and the City' (1973), 'Keywords' (1976) and 'Marxism and Literature' (1977).