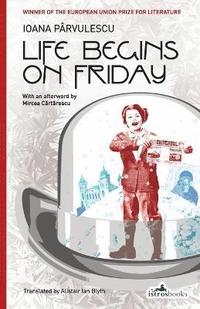 av Ioana Parvulescu
Häftad Engelska, 2016-06-20
169
Köp
Spara som favorit
A young man is found lying unconscious on the outskirts of Bucharest. No one knows who he is and everyone has a different theory about how he got there. The stories of the various characters unfold, each closely interwoven with the next, and outlining the features of what ultimately turns out to be the most important and most powerful character of all: the city of Bucharest itself. The novel covers the last 13 days of 1897 and culminates in a beautiful tableau of the future as imagined by the different characters. We might, in fact, say that it is we who inhabit their future. And so too does Dan Cretu, alias Dan Kretzu, the present-day journalist hurled back in time by some mysterious process for just long enough to allow us a wonderful glimpse into a remote, almost forgotten world, but one still very much alive in our hearts.
Visa hela texten

""Life Begins On Friday "is a unique and charming journey into the amazing world of times gone by a wrold more than 100 years distant, but very similar to our own in its core features." EU Prize for Literature committee (winner)"

Ioana Parvulescu was born in Brasov, Romania. Her real literary life began after the Revolution of '89. In 1993 she became an editor at Romania literara, a literary magazine where she published a weekly column for 18 years. She launched and coordinated the "Night Table Books" collection at Humanitas (a major Bucharest publishing house), which ran for 10 years. She has published over ten books, and also translated from French and German (Maurice Nadeau, Antoine de Saint-Exupery, Angelus Silesius, Rilke etc.) She is best known for the titles she has published at Humanitas: Return to the Inter-war Bucharest (imaginative non-fiction, 2003), In the Thick of the Nineteenth Century (2005) and Life Begins on Friday (2009), which is her first novel and has been translated into a number of languages. Swedish (Stockholm, 2244/ Bonnier, 2011) and French (Seuil 2016). She is currently a Professor at the Bucharest Faculty of Letters where she teaches modern Romanian literature. Her most recent novel is a sequel to this book, The Future Begins on Monday (2012).