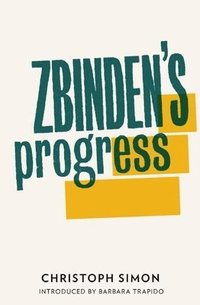 av Christoph Simon
Häftad Engelska, 2012-08-31
129
Köp
Spara som favorit
Finns även som
Visa alla 1 format & utgåvor
Lukas Zbinden leans on the arm of Kazim, as they walk slowly down the stairway towards the door of his old people's home. Step by step, the irrepressible Lukas recounts the life he shared with his wife Emilie and his son. She loved to walk in the countryside; he loved towns and meeting strangers. Different in so many ways, what was the secret of their life-long love? And why is it now so hard for him to talk to his son? Gradually we get to know a man with a twinkle in his eye and learn the captivating story of this man, his late wife, their son and the many people he has met along the way. Zbinden's Progress is heart-rending, heart-warming and hilarious. --- Winner of the Bern Literature Prize 2010
Visa hela texten

Christoph Simon was born in 1972 in Emmental, Switzerland. After travels through the Middle East, Poland, South America, London and New York, he has settled in Berne. His first novel, Franz, or Why Antelopes Run in Herds (2001) has sold over 10,000 copies, while Planet Obrist (2005) was nominated for the Ingeborg Bachmann Prize. Zbinden's Progress is his fourth novel and won the 2010 Bern Literature Prize.