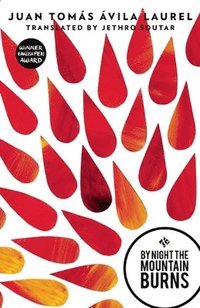 By Night the Mountain Burns

av Jethro Soutar, Juan Tomas Avila Laurel
Inbunden Engelska, 2014-11-30
120
Köp
Spara som favorit
Skickas inom 5-8 vardagar.
Fri frakt inom Sverige över 159 kr för privatpersoner.
By Night The Mountain Burns recounts the narrator's childhood on a remote island off the West African coast, living with his mysterious grandfather, several mothers and no fathers. We learn of a dark chapter in the island's history: a bush fire destroys the crops, then hundreds perish in a cholera outbreak. Superstition dominates: now the islanders must sacrifice their possessions to the enraged ocean god. What of their lives will they manage to save? Whitmanesque in its lyrical evocation of the island, Avila Laurel's writing builds quietly, through the oral rhythms of traditional storytelling, into gripping drama worthy of an Achebe or a Garcia Marquez.
Visa hela texten

Praise for Avila Laurel ------'The volcanic island of Annobon, off the west African coast, provides the setting for this novel about a poor community facing a series of natural disasters. Survival, hope and despair wrestle in this surprising work by Equatorial Guinea's leading author.' Angel Gurria-Quintana, Financial Times (Chosen as 1 of 7 Translated Books of the Year 2014)------ 'Poignant...This fascinating story emerges from the speaker's inquiries into the identities and social laws of his community, and from his attempts to make sense of the calamities of his homeland.' Publishers Weekly ------ 'Avila Laurel's novel tells of survival in fierce isolation, a place where the ocean provides the only horizon and is a source of the greatest hopes and the most awful fears.' Alfonso Carnicero Izquierdo ------ 'It has fallen to Avila Laurel to be the chronicler of Annobon, just as Derek Walcott is for St Lucia, VS Naipaul for Trinidad and Edwidge Danticat is for Haiti. To this list must now be added the name of Annobon, half-evoked and half-dreamed in Avila Laurel's unique language.' JM Pedrosa -------- 'The Equatorial Guinean novel that has perhaps captivated me the most is By Night The Mountain Burns by Juan Tomas Avila Laurel. It is a story of great mystery, but also a testimonial to life on Annobon Island. This real-life island seems to emerge from the sea like some Atlantic legend, but the harsh conditions to which the islanders have been subjected mean we're a long way from charming tales of mariners and mermaids. In these large-leaved green forests, the horror stories are all too real.' Manuel Gutierrez Aragon, El Pais ------- 'Reading [By Night the Mountain Burns], it's hard not to feel the excitement that comes with discovering a great author; the rare exhilaration that strikes once every few hundred books - It is the perfectly pitched tone, however, and the simplicity of the recounting that make it a truly polished work - The result is a luminous tapestry of people reacting in different ways to the assaults of natural catastrophes, accidents and economic hardship.' Patricia Duffaud, The Bookbag ------- 'Avila Laurel weaves a fascinating tale of island life, poverty and isolation - enchanting and absorbing - It is a fabulous book and one that has been expertly translated. Well worth a read.' Booktrust ---------'[A] melodic text rife with images of hollowed canoes and mist-enveloped mountains that would be almost too mythical were it not for the hilarious commentaries of the speaker - Laurel's novel entrances the reader with its vibrant sense of place - Reading By Night the Mountain Burns is like listening to an old man tell a story that is so clear to him that his eyes look out through his child self onto a world he no longer inhabits - It is not a text of voyeurism or tourism; it is a text for remembering together.' Emma Schneider, Full Stop-----'[The novel's] strength lies in the complexity of the social commentary that runs beneath the plot...That is where the novel is at its best, in incisively exposing the difficulties with cultural transmission, interpretation and ownership...the novel isn't about escapism, about disappearing into another world, it has to be understood and considered socially. That is where it shines.' The Pittsburgh Post Gazette-------'Avila Laurel is a brave opponent of the corrupt Obiang regime in his native land. His dark, troubled narrative of "our Atlantic Ocean island" is remarkable, original and poetic.' Tom Moriarty, Irish Times-----------

Juan Tomas Avila Laurel was born in 1966 in Equatorial Guinea. By Night The Mountain Burns is based on his memories of growing up on the remote island of Annobon. He made headlines in 2011 by embarking on a hunger strike, in an anti-government protest. He now lives exiled in Barcelona.