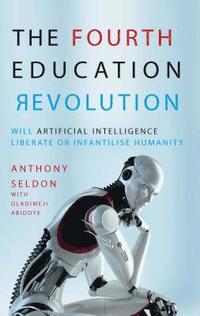 av Anthony Seldon, Oladimeji Abidoye
Häftad Engelska, 2018-04-30
179
Köp
Spara som favorit
"Nothing matters more than education if we are to see AI liberate, not infantilise humanity." Highly respected British educational scholar, Sir Anthony Seldon, explores the most important issue facing education (and humanity at large): the fast approaching revolution in Artificial Intelligence or AI. This book is a call to educators everywhere to open their eyes so that we can begin shaping the future of education around the world. Britain and the US have an excellent education system in their schools and universities... but it is tailored to the twentieth century. The factory mass teaching methods of the last educational era have failed to conquer enduring problems of inequity and unfairness. Students have to make progress at a set rate which can demotivates and bore some. Will the AI revolution be able to remedy these problems? This extended thesis explores the history of education, the many different styles of education (with a particular focus on Britain and the USA), and the different types of intelligence for which current teaching methods are unable to provide any support. The final part of the book covers the possibilities for how we can adapt our methods to new technologies, using Sir Anthony's innovative ten-part model of education as a framework.
Visa hela texten

Now Vice-Chancellor of Buckingham University, Sir Anthony Seldon is the former head of one of the country's leading independent schools. He is regarded as one of the UK's most authoritative high profile commentators on education and his views are frequently sought by the government and political parties. A champion of digital learning and of bridging the divide between state and independent sectors, he is also one of Britain's pre-eminent political biographers and contemporary historians. In addition to a number of important booklets on education, he is the author or editor of over 35 books on contemporary history, politics and education.