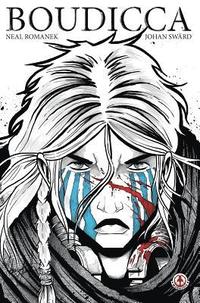 av Neal Romanek
Inbunden Engelska, 2017-12-20
299
Köp
Spara som favorit
Kan levereras innan julafton!
Finns även som
Visa alla 2 format & utgåvor
A.D., 60 - The Roman Empire has come to the Britain. This land of warring tribes is now one unified colony with one law, Roman law. A brilliant but naïve young druid, Fox, is sent on an important mission to advise the dying king of the Iceni tribe, Prasutagus.
Prasutagus, king of the Iceni tribe and once a great warrior, has chosen the way of good sense and struck bargains with the Roman masters - allowing him and his family to keep their privilege, at the expense of their dignity. His queen, Boudicca, as handy with a spear as she is with her tongue, sees Prasutagus's "good sense" as weakness, capitulation, cultural suicide.
When Prasutagus dies, Boudicca is left with a decision: continue her husband's path of compromise with the invaders, or be true to her own rebellious nature. With Fox's help, Boudicca alters the king's will, cutting the Romans out of a lucrative windfall they have been expecting.
Decianus Catus, the rapacious, gluttonous Roman procurator of the province, responds swiftly and viciously. The Iceni are butchered, their farms looted and burned. Boudicca is flogged and her two daughters executed before her eyes.
Boudicca is transformed from defiant patriot to bloodthirsty Nemesis. With growing support from the other British tribes, the advice of Fox, and the plotting of Fox's druid superiors, Boudicca's rage ignites a full scale revolt against Roman power.
The British mob flattens city after city until finally they must face the Roman army itself - disciplined, battle-hardened troops commanded by the military governor Suetonius Paulinus. Despite their overwhelming numbers, their passion, the support of the powerful Celtic gods, Boudicca's army is routed and the queen captured.
Turning himself in, Fox gains a momentary audience with his queen and slips her a tiny vial of poison, and by morning she is dead, spared the humiliation of a Roman triumph. Fox escapes and, aided by his friend Anker, the last druid in Britain, he embarks on a sacred journey into the next world - as a human sacrifice - in the hopes that he will one day help bring the old ways back. 2000 years later, Fox will be unearthed as "Lindow Man", the extraordinary archaeological find which today lies in the British Museum.
Visa hela texten