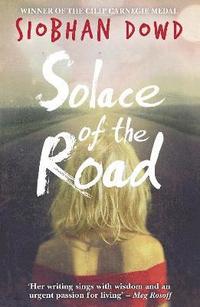 Solace of the Road

av Siobhan Dowd
Häftad Engelska, 2015-07-30
12-15 år
116
Köp
Spara som favorit
Finns även som
Visa alla 2 format & utgåvor
Memories of Mum are the only thing that make Holly Hogan happy. She hates her foster family with their too-nice ways and their false sympathy. And she hates her life, her stupid school and the way everyone is always on at her. Then she finds the wig, and everything changes. Wearing the long, flowing blonde locks she feels transformed. She's not Holly any more, she's Solace: the girl with the slinkster walk and the super-sharp talk. She's older, more confident - the kind of girl who can walk right out of her humdrum life, hitch to Ireland and find her mum. The kind of girl who can face the world head on. So begins a bittersweet, and sometimes hilarious journey as Solace swaggers and Holly tiptoes across England and through memory, discovering her true self, and unlocking the secrets of her past. Holly's story will leave a lasting impression on all who travel with her.
Visa hela texten

Unexpectedly life affirming, wise and mature * The Times * A memorably touching story with a suitably emotional ending * Guardian * For readers more at home with awkward reality than sentimentality, Solace of the Road has a lot to offer. Siobhan Dowd meets every challenge with the authority of a born writer * Independent * Real, touching, at times gritty, but laced with humour throughout it will delight teenage and adult readers alike * Irish Post * This gritty, realistic novel which deploys Dowd's talent for humour, will appeal to the older teenage reader * Daily Telegraph *

Siobhan Dowd lived in Oxford with her husband, Geoff, before tragically dying from cancer in August 2007, aged 47. She was both an extraordinary writer and an extraordinary person. Siobhan's first novel, A Swift Pure Cry, won the Branford Boase Award and the Eilis Dillon Award and was shortlisted for the Carnegie Medal and Booktrust Teenage Prize. Her second novel, The London Eye Mystery, won the 2007 NASEN & TES Special Educational Needs Children's Book Award. In March 2008, the book was shortlisted for the prestigious Children's Books Ireland Bisto Awards. Siobhan's third novel, Bog Child, was the first book to be posthumously awarded the Carnegie Medal in 2008. The award-winning novel A Monster Calls by Patrick Ness was based on an idea of Siobhan's. Her novella, The Ransom of Dond, was published in 2013, illustrated throughout by Pam Smy.