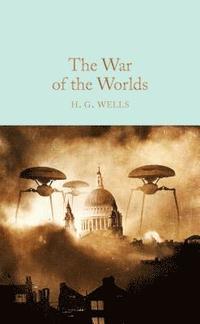 The War of the Worlds

av H G Wells
Inbunden Engelska, 2017-01-26
97
Köp
Spara som favorit
Kan levereras innan julafton!
Finns även som
Visa alla 9 format & utgåvor
Shooting stars tear across the night sky, then a gigantic artificial cylinder descends from Mars to land near London. Inquisitive locals gather round, only to be struck down by a murderous Heat-Ray. Giant destructive machines disgorge from the cylinder, destroying everything in their path on a merciless march towards the capital. Can humanity survive this Martian onslaught? A gripping adventure written in semi-documentary style, The War of the Worlds by H. G. Wells is the seminal man versus machine adventure which has inspired countless science fiction stories and novels. This Macmillan Collector's Library edition of The War of the Worlds contains an introduction by author James P. Blaylock. Designed to appeal to the booklover, the Macmillan Collector's Library is a series of beautiful gift editions of much loved classic titles. Macmillan Collector's Library are books to love and treasure.
Visa hela texten

Herbert George Wells, the son of a shopkeeper and a lady's maid, was born in Kent in 1866. A bookish child, his education was interrupted when he served a brief and gruelling apprenticeship to a draper. But Wells then went on to study biology under the great T. H. Huxley, before finding instant literary success in 1895 with the publication of his first 'scientific romance', The Time Machine. This was followed in quick succession by The Island of Dr Moreau, The Invisible Man and The War of the Worlds. Wells also wrote extensively on social issues, history and science. He died in 1946.