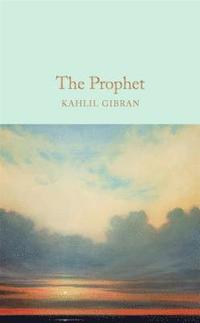 av Kahlil Gibran
Inbunden Engelska, 2016-07-14
104
Köp
Spara som favorit
Finns även som
Visa alla 8 format & utgåvor
Thought-provoking, comforting and wise, the simple truths of The Prophet remain compelling and rewarding to this day. Part of the Macmillan Collector's Library; a series of stunning, clothbound, pocket sized classics with gold foiled edges and ribbon markers. These beautiful books make perfect gifts or a treat for any book lover. Utterly unique and beloved around the world, The Prophet is a collection of twenty-six poetic essays by the Lebanese artist, philosopher and writer Khalil Gibran. Telling the story of the prophet Al-Mustafa and his conversations with various acquaintances as he returns home after a long absence, the book touches on subjects of universal concern, including love, friendship, passion, pain, religion and freedom.
Visa hela texten

I have loved many books over the years, but the one I would never be parted from and read again and again is The Prophet by Kahlil Gibran . . . Each time I open the book I find myself feeling that if the whole world was to read it, it would be a far better place -- Lesley Pearse * Independent *

Kahlil Gibran was born into an impoverished Christian family in Bsharri, Lebanon in 1883. His masterpiece, The Prophet, was first published in 1923 and is among the most-read books of the last century, inspiring the lyric-writing of John Lennon, among others. But Gibran enjoyed only scant recognition in his own time - his health broken by chronic illness and self-neglect, he died in 1931 aged just 48, in his adopted home of New York. He is buried at Bsharri, where his tomb, now a museum, is visited by more than 50,000 pilgrims annually.