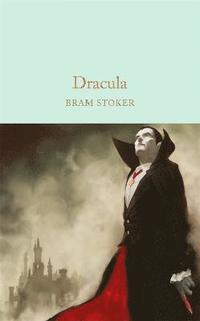 av Bram Stoker
Inbunden Engelska, 2016-07-14
96
Köp
Spara som favorit
Skickas inom 7-10 vardagar.
Gratis frakt inom Sverige över 159 kr för privatpersoner.
Finns även som
Visa alla 8 format & utgåvor
Sensual, dark and thrilling, Bram Stoker's Dracula remains the seminal work of Gothic fiction, and in this elegant Macmillan Collector's Library edition, which includes an illuminating afterword by Jonty Claypole, readers can experience the horror and excitement as never before. When Jonathan Harker is summoned to Transylvania to finalize a property deal for the mysterious Count Dracula, he stumbles upon an ancient evil he is unprepared to face. When that evil escapes to England, the entire nation is suddenly under threat and only an aged vampire hunter, Professor Abraham Van Helsing, can put a stop to the bloodshed. Designed to appeal to the booklover, the Macmillan Collector's Library is a series of beautiful gift editions of much loved classic titles. Macmillan Collector's Library are books to love and treasure.
Visa hela texten

Abraham Stoker was born near Dublin in 1847. He was virtually bedridden with an unidentified illness until the age of seven. After graduating from Trinity College, he followed his father into a career as a civil servant, writing journalism and short stories in his spare time. In 1876 he met the actor Henry Irving and, two years later, became manager of Irving's Lyceum Theatre in London. Stoker met his wife, Florence Balcombe, through Oscar Wilde's parents. He wrote many books, including The Lair of the White Worm (1911), but Dracula (1897) remains his most celebrated. He died in 1912.