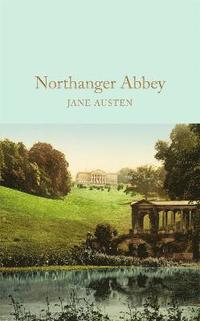 av Jane Austen
(1 röst)
Inbunden Engelska, 2016-07-14
119
Köp
Spara som favorit
Finns även som
Visa alla 8 format & utgåvor
Jane Austen's Northanger Abbey is broadly comedic and brilliantly postmodern in its lampooning of a genre. Part of the Macmillan Collector's Library; a series of stunning, clothbound, pocket sized classics with gold foiled edges and ribbon markers. These beautiful books make perfect gifts or a treat for any book lover. This edition is gorgeously illustrated by Hugh Thomson and features an afterword by David Pinching. Northanger Abbey tells the story of Catherine Morland, a naive young woman whose perceptions of the world around her are greatly influenced by the romantic gothic novels to which she is addicted. When she moves to Bath she sees mystery and intrigue all around her, not least of all in Northanger Abbey itself, the home of General Tilney and his handsome son Henry, where Catherine suspects a sinister crime has occurred.
Visa hela texten

The work of a great writer flexing her creative muscles . . . As well as being a deft comedy of manners, Northanger Abbey also fools entertainingly with the slippery relationship of fact and fiction. -- Robert McCrum * Guardian * Austen's Northanger Abbey was in part a playful response to what she considered 'unnatural' in the novels of her day: Instead of perfect heroes, heroines and villains, she offers flawed, rounded characters who behave naturally and not just according to the demands of the plot. -- Jo Baker * New York Times *

Jane Austen was born in 1775 in rural Hampshire, the daughter of an affluent village rector who encouraged her in her artistic pursuits. In novels such as Pride and Prejudice, Mansfield Park and Emma she developed her subtle analysis of contemporary life through depictions of the middle classes in small towns. Her sharp wit and incisive portraits of ordinary people have given her novels enduring popularity. She died in 1817.