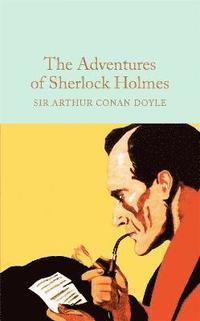 The Adventures of Sherlock Holmes

av Arthur Conan Doyle
Inbunden Engelska, 2016-08-11
95
Köp
Spara som favorit
Skickas inom 7-10 vardagar.
Gratis frakt inom Sverige över 159 kr för privatpersoner.
Finns även som
Visa alla 11 format & utgåvor
The Adventures of Sherlock Holmes is perhaps the greatest collection of detective stories ever written. From his residence at 221B Baker Street, Sherlock Holmes solves a series of baffling and bizarre cases, including those of a man terrified by the arrival of an envelope containing orange pips, and a woman whose fiance disappeared on his way to their wedding. Each story showcases the great detective's inimitable and extraordinary deductive powers, recounted to us by his faithful friend and colleague, Dr Watson. Part of the Macmillan Collector's Library; a series of stunning, clothbound, pocket-sized classics with gold foiled edges and ribbon markers. These beautiful books make perfect gifts or a treat for any book lover. This edition features an afterword by David Stuart Davies - a Fellow of the Royal Literary Fund and an authority on Sherlock Holmes.
Visa hela texten

Arthur Conan Doyle was born in 1859. He trained to be a doctor at Edinburgh University and eventually set up a medical practice in Southsea. During the quiet periods between patients, he turned his hand to writing, producing historical novels such as Micah Clarke and adventure yarns including The Lost World, as well as four novels and fifty-six stories involving his most celebrated creations, Sherlock Holmes and Dr Watson. Doyle was knighted in 1902. In later life he devoted much of his time to his belief in Spiritualism, using his writing and celebrity as a means of providing funds to support activities in this field. He died in 1930.