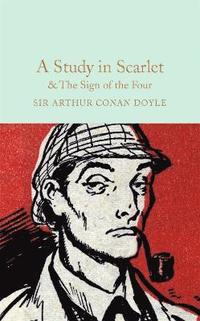 A Study in Scarlet &; The Sign of the Four

av Arthur Conan Doyle
Inbunden Engelska, 2016-08-11
121
Köp
Spara som favorit
Finns även som
Visa alla 4 format & utgåvor
All legends begin somewhere, and the two novels here are where one of the world's best-loved legends began. In A Study in Scarlet, Sherlock Holmes and Dr Watson first meet and investigate a seemingly impossible mystery that begins with a corpse in a deserted house. In The Sign of the Four the detective faces an even greater challenge: solving both the disappearance of Captain Arthur Morstan and the theft of the Agra treasure in India. Part of the Macmillan Collector's Library; a series of stunning, clothbound, pocket-sized classics with gold foiled edges and ribbon markers. These beautiful books make perfect gifts or a treat for any book lover. In this edition, Sherlock scholar David Stuart Davies provides an illuminating afterword.
Visa hela texten

Arthur Conan Doyle was born in 1859. He trained to be a doctor at Edinburgh University and eventually set up a medical practice in Southsea. During the quiet periods between patients, he turned his hand to writing, producing historical novels such as Micah Clarke and adventure yarns including The Lost World, as well as four novels and fifty-six stories involving his most celebrated creations, Sherlock Holmes and Dr Watson. Doyle was knighted in 1902. In later life he devoted much of his time to his belief in Spiritualism, using his writing and celebrity as a means of providing funds to support activities in this field. He died in 1930.