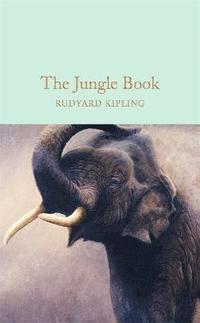 av Rudyard Kipling
Inbunden Engelska, 2016-08-11
89
Köp
Spara som favorit
Finns även som
Visa alla 10 format & utgåvor
Meet the human boy Mowgli, the sleek panther Bagheera, the 'sleepy brown bear' Baloo, and the conniving tiger Shere Khan in one of the world's best-loved books. Part of the Macmillan Collector's Library; a series of stunning, clothbound, pocket-sized classics with gold foiled edges and ribbon markers. These beautiful books make perfect gifts or a treat for any book lover. This collector's edition includes the original illustrations of Rudyard's father J. Lockwood Kipling as well as an afterword by writer and editor David Stuart Davies. A collection of short stories and poems centred on the charming cast, The Jungle Book not only follows Mowgli's journey to learn the Law of the Jungle from his animal companions but also introduces some of its other wonderful inhabitants in stories such as 'Rikki-Tikki-Tavi' and 'The White Seal'.
Visa hela texten

Rudyard Kipling was born in India in 1865. After intermittently moving between India and England during his early life, he settled in the latter in 1889, published his novel The Light That Failed in 1891 and married Caroline (Carrie) Balestier the following year. They returned to her home in Brattleboro, Vermont, where Kipling wrote the two Jungle Books and Captains Courageous. He continued to write prolifically and was the first Englishman to receive the Nobel Prize for Literature in 1907 but his later years were darkened by the death of his son John at the Battle of Loos in 1915. He died in 1936.