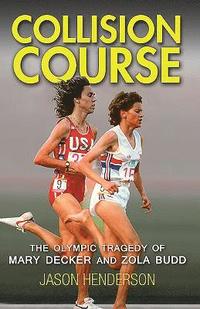 The Olympic Tragedy of Mary Decker and Zola Budd

av Jason Henderson
Häftad Engelska, 2016-07-29
159
Bevaka
Spara som favorit
Bokens leverantör håller tillfälligt stängt på grund av Coronapandemin. Klicka "Bevaka" för att få ett mejl när boken går att beställa igen eller välj ett annat format nedan.
Finns även som
Visa alla 1 format & utgåvor
Mary Decker's clash with Zola Budd at the 1984 Los Angeles Games is one of the biggest and most controversial events in Olympic history. In a head-to-head that gripped the imagination of the world, the 3000 metres race pitted the experienced and glamourous world champion from the host nation against a prodigious, teenage waif from South Africa wearing a hastily-organised British flag on her vest and, memorably, no shoes on her feet.Disastrously, a mid-race collision saw Decker tumble to the inside of the track after her legs tangled with Budd's as the 18-year-old overtook the American in a battle for pole position. Distraught and unable to carry on, the tearful Decker watched in frustration as Maricica Puica of Romania stormed to gold while Budd, who was heavily booed by the partisan crowd in the closing stages, faded to seventh. Using the famous Olympic moment as its focal point, Collision Course tells the story of two of the best-known and greatest athletes of al ltime, analyses their place in history as pioneers of women's sport, and lifts the lid on two lives that have been filled of sporting and political intrigue that, until now, has never been fully told.
Visa hela texten

'Henderson does a terrific job contextualizing each performance. A must-read...[his] expert knowledge and his passion for the sport shine through to make Collision Course a hit' -- Jonathan Gault * LetsRun.com *

Jason Henderson began writing for Athletics Weekly in 1995 and has edited the magazine since 2001. Aged 45, he has covered four Olympics and written about athletics in The Sunday Times, Observer, Guardian, The Times and GQ. His passion for athletics was ignited as a teenager in the 1980s when he pestered his father to drive him from their home in Blackpool to track meetings as far afield as Cwmbran and Crystal Palace to watch Zola Budd's early races in the UK.