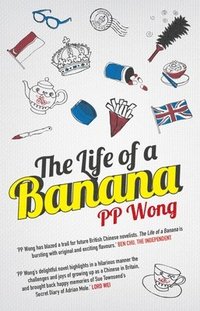 The Life of a Banana

av P P Wong
Häftad Engelska, 2014-08-15
109
Bevaka
Spara som favorit
Tillfälligt slut – klicka "Bevaka" för att få ett mejl så fort boken går att köpa igen.
Finns även som
Visa alla 1 format & utgåvor
Xing Li is what some Chinese people call a banana - yellow on the outside and white on the inside. Although born and raised in London, she never feels like she fits in. When her mother dies, she moves with her older brother to live with venomous Grandma, strange Uncle Ho and Hollywood actress Auntie Mei. Her only friend is Jay - a mixed raced Jamaican boy with a passion for classical music. Then Xing Li's life takes an even harsher turn: the school bullying escalates and her uncle requests she assist him in an unthinkable favour. Her happy childhood becomes a distant memory as her new life is infiltrated with the harsh reality of being an ethnic minority. Consumed by secrets, violence and confusing family relations, Xing Li tries to find hope wherever she can. In order to find her own identity, she must first discover what it means to be both Chinese and British.
Visa hela texten

'PP Wong has blazed a trail for future British Chinese novelists. The Life of a Banana is bursting with original and exciting flavours.' -- Ben Chu, The Independent

PP Wong was born in London in 1982. Her parents, both Chinese and originally from Singapore, moved between London and Asia during her childhood. She experienced extreme bullying throughout her schooling in the UK. PP Wong worked as an actress for six years, with her first job aged 15 when she was cast as 'Screaming Vietnamese girl' in a James Bond film. Other work includes performing in lead roles at the Soho Theatre in Moonwalking in Chinatown and BBC Radio 4's play Avenues of Eternal Peace about the 1989 Tiananmen Square massacre. PP Wong is now a writer and is also editor of www.bananawriters.com, a platform to encourage new East Asian and South East Asian writers with thousands of readers from over 30 different countries.