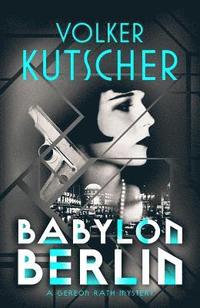 av Volker Kutscher
(3 röster)
Häftad Engelska, 2016-05-19
109
Köp
Spara som favorit
Skickas inom 7-10 vardagar.
Fri frakt inom Sverige över 159 kr för privatpersoner.
Finns även som
Visa alla 3 format & utgåvor
Berlin, 1929. Detective Inspector Rath, was a successful career officer in the Cologne Homicide Division before a shooting incident in which he inadvertently killed a man. He has been transferred to the Vice Squad in Berlin, a job he detests, even though he finds a new friend in his boss, Chief Inspector Wolter. There is seething unrest in the city and the Commissioner of Police has ordered the Vice Squad to ruthlessly enforce the ban on May Day demonstrations. The result is catastrophic with many dead and injured, and a state of emergency is declared in the Communist strongholds of the city. When a car is hauled out of Berlin's Landwehr Canal with a mutilated corpse inside the Commissioner decides to use this mystery to divert the attention of press and public from the casualties of the demonstrations. The biggest problem is that the corpse cannot be identified.
Visa hela texten

'Babylon Berlin is a stunning novel that superbly evokes Twenties Germany in its seedy splendor. An impressive new crime series.'-Sarah Ward, author of 'In Bitter Chill'; 'Gripping, skilfully plotted and rich in historical detail, Babylon Berlin introduces us to Detective Inspector Gereon Rath, who navigates the turbulent waters of Weimar Germany in a suspenseful and noirish tale. The novel is hopefully the first of many to be translated from this best-selling German crime series.'-Mrs Peabody Investigates; 'Kutscher successfully conjures up the dangerous decadence of the Weimar years, with blood on the Berlin streets and the Nazis lurking menacingly in the wings.'-Sunday Times; 'Gripping evocative thriller set in Berlin's seedy underworld during the roaring Twenties. A massive hit in its native Germany, Volker Kutscher's series, centered on Detective Inspector Gereon Rath, is currently being filmed for television.'-Mail on Sunday; 'The best German crime novel of the year!'-Bucher; 'Kutscher's undertaking to portray the downfall of the Weimar Republic through the medium of detective fiction is both ambitious and utterly convincing. Let's hope it receives the attention it deserves.'-Frankfurter Allgemeine Zeitung; 'With his detective novel Babylon Berlin, Volker Kutscher has succeeded in creating an opulent portrait of manners.'-Der Spiegel; 'Has all the allure of an addictive drug: you won't be able to put it down until you've read to the end.'-Frankfurter Allgemeine Zeitung; 'A highly readable piece of crime fiction set against a politico-historical background.'-Osterreichischer Rundfunk.

Volker Kutscher was born in 1962 in Lindlar, West Germany. He is the author of the enormously successful Gereon Rath crime series which, in addition to compelling narrative, is notable for its scrupulous accuracy on Germany in the years between its beginning in 1927 and the approach to the Second World War.