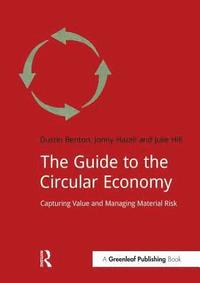 The Guide to the Circular Economy

av Dustin Benton, Jonny Hazell, Julie Hill
Häftad Engelska, 2015-01-05
399
Köp
Spara som favorit
Skickas inom 7-10 vardagar.
Gratis frakt inom Sverige över 159 kr för privatpersoner.
Finns även som
Visa alla 2 format & utgåvor
The term 'Circular Economy' is becoming familiar to an increasing number of businesses. It expresses an aspiration to get more value from resources and waste less, especially as resources come under a variety of pressures - price-driven, political and environmental. Delivering the circular economy can bring direct costs savings to businesses, reduce risk and offer reputational advantages, and can therefore be a market differentiator -- but working out what counts as 'circular' activity for an individual business, as against the entire economy or individual products, is not straightforward. This guide to the circular economy gives examples of what this new business model looks like in practice, and showcases businesses opportunities around circular activity. It also: explores the debate around circular economy metrics and indicators and helps you assess your current level of circularity, set priorities and measure success equips readers to make the links between their own company's initiatives and those of others, making those activities count by influencing actors across the supply chain outlines the conditions that have enabled other companies to change the system in which they operate. Finally, this expert short work sets the Circular Economy in a political and business context, so you understand where it has come from and where it is going.
Visa hela texten

Dustin Benton started with Green Alliance in June 2011, and runs the Low Carbon Energy and Resource Stewardship themes. His role includes responsibility for work on energy efficiency and renewables, the UK's electricity market, and CCS, alongside work on resource scarcity and the Circular Economy Task Force. Before joining Green Alliance, Dustin worked for the Campaign to Protect Rural England where he led work on the relationship between landscape protection, climate change, and new energy infrastructure. He also led on the future of land use, and was a key contributor to CPRE's Vision for the Countryside, which provides a long term perspective on how the countryside should be managed in light of increasing demands on the land. He holds an MA in political thought and theory from the University of Birmingham and an MA in international relations and French from the University of St Andrews. Jonny Hazell joined Green Alliance in June 2012 to support the Resource Stewardship theme. He works with Dustin Benton and associate Julie Hill on the Circular Economy Task Force.??Before joining Green Alliance he was research director at Inovenergy where he worked on 'The 1 Tonne Roadshow', an event series exploring and promoting best practice in waste management. He also led research projects on the UK's renewable heat market, and consultancy work on promoting the reuse of materials in London and social enterprise in China. He holds an MSc in nature, society and environmental policy and a BA in experimental psychology, both from the University of Oxford. Julie Hill is a former Director and now Associate of Green Alliance. In November 2014 she was appointed Chair of WRAP UK, and had previously chaired the Circular Economy Task Force, a group of eight leading businesses, including WRAP. She is also a member of the board of the Consumer Council for Water and a fellow of the University of Surrey. She has previously been a member of the board of the Eden Project in Cornwall and the Environment Agency for England and Wales. She is the author of 'The Secret Life of Stuff' published by Vintage Books in 2011.

Preface: Who this is book is for and what you should get out of reading it. Introduction: A new model for business and society Step 1: Getting hold of key concepts Economies are underpinned by natural resources Resources are becoming less 'secure' for a variety of reasons Circular Economy thinking gives businesses more options There are also economy-wide benefits. The Circular Economy can be local, national or global The idea is not new, it has been reaching maturity over the last three decades Step 2: Seeing the benefits and interpreting the idea to colleagues Economic resilience New business opportunities Innovation stimulus Avoided risk Brand advantage Natural progression of the CSR agenda Step 3: Reviewing your organisation's potential for implementing more circular approaches. Look at your business Look at your values What you can do within your business Where you can influence others Where you can disrupt others Where you probably need collaboration Identifying barriers Finding solutions Keeping an eye on the system level Step 4: Identifying priorities and measuring success Some approaches to indicators Developments in Europe What will work best? Step 5: Making full use of the brokering organisations Conclusion Bibliography