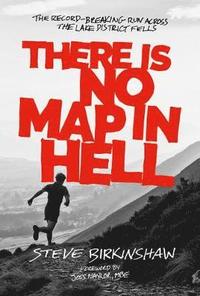 There is No Map in Hell

The record-breaking run across the Lake District fells

av Steve Birkinshaw
Häftad Engelska, 2017-05-04
165
Köp
Spara som favorit
Skickas inom 5-8 vardagar.
Gratis frakt inom Sverige över 159 kr för privatpersoner.
In 1986, the legendary fell runner Joss Naylor completed a continuous circuit of all 214 Wainwright fells in the Lake District, covering a staggering distance of over 300 miles - plus many thousands of metres of ascent - in only seven days and one hour. Those in the know thought that this record would never be beaten. It is the ultimate British ultramarathon. The person taking on this superhuman challenge would have to be willing to push harder and suffer more than ever before. There is no Map in Hell tells the story of a man willing to do just that. In 2014, Steve Birkinshaw made an attempt at setting a new record. With a background of nearly forty years of running elite orienteering races and extreme-distance fell running over the toughest terrain, if he couldn't do it, surely no one could. But the Wainwrights challenge is in a different league: aspirants need to complete two marathons and over 5,000 metres of ascent every day for a week. With a foreword by Joss Naylor, There is no Map in Hell recounts Birkinshaw's preparation, training and mile-by-mile experience of the extraordinary and sometimes hellish demands he made of his mind and body, and the physiological aftermath of such a feat. His deep love of the fells, phenomenal strength and tenacity are awe inspiring, and testimony to athletes and onlookers alike that 'in order to attain the impossible, one must attempt the absurd'.
Visa hela texten

'An epic account of an extraordinary achievement by a remarkable athlete.' (Richard Askwith, author of Feet in the Clouds and Running Free); 'The world of ultra running has many ordinary people doing extraordinary things, but none more so than Steve Birkinshaw. In this book Steve tells his own remarkable story from his childhood exploits in orienteering to his record-breaking six-day 214-peak Wainwrights run. The aftermath of this huge effort saw Steve suffer with an unknown illness linked with fatigue, and he tells this side of his story with openness and emotion. There is no Map In Hell is a story of a family man with a yearning for adventure in the hills, and is a book that any runner will love.' (Andy Nuttall, ULTRA magazine); 'A very entertaining, revealing and highly readable account of this top mountain runner's trials and tribulations on trail races and record-breaking attempts - most notably the Wainwrights. It's a fascinating insight into what drives Steve to push himself quite so incredibly hard. A must-read this summer!' (Claire Maxted, Trail Running magazine); 'This is a captivating account of a seriously extreme journey. The tales of preparation and recovery are as fascinating as the meticulous detail of the record breaking run itself.' (David McCabe, Editor of The Fellrunner magazine); 'He modestly describes the toll it takes as his body gradually disintegrates over the seven days, and also the difficulties the fatigue give him afterwards. If you like extreme challenges, this is a brilliant unravelling of the preparation and effects of Steve's navigation to and through hell.' (Steve Chilton, fell runner and author of several popular running books); 'This book has been a discovery of a thorough, deep, loving, thoughtful man with a core of steel. Steve took the level of what humans (or rather Steve) can endure to the furthest possible imaginable level.' (Nicky Spinks, elite fell runner); 'Tough, gritty, humane, and funny, Steve shows the sport and the community in its true light. An inspirational tale of human endeavour in the mountains, this is the stuff of fell-running legend'. (Jasmin Paris, elite fell runner); 'A wince-inducing insight into what it takes to break epic fell-running records, told with the sort of reluctance and humility that makes Birkinshaw all the more of a hero. I loved the book.' (Damian Hall, outdoor journalist and ultramarathon runner); 'The book is a fascinating account of what makes Steve tick and I am seriously impressed with both Steve's determination and the book. The book is a compelling read by a nice but extremely tough person that has pushed his body to the limit of what it can take.' (Billy Bland, Bob Graham Round record holder and former champion fell runner); 'There is no Map in Hell is a frank, personal, yet inspiring account of an ultra-endurance feat few could comprehend. Steve's book is a tour-de-force of the Lake District Wainwrights, detailing a once in a generation record, which was only possible thanks Steve's lifetime of mountain running experience, and the strength of personality to suck up suffering like few could imagine.' (Shane Ohly, Race Director - Berghaus Dragon's Back Race). There is no Map in Hell puts meat on the bones of the raw statistics of such a mammoth physical and mental effort, without pathos. He [Steve] provides an insight into how he came to be one of Britain's top ultrarunners; the build-up to the Wainwrights attempt and the massive amount of help he had from many people to enable him to accomplish his astonishing feat. (Bob Smith, Editor of Grough magazine); There is no Map in Hell shares Steve's quest to break a record. You'll be side by side with him, experiencing his preparation, training and gruelling mile-by-mile run. This book will give you confidence to keep working towards your goals. (Evie Serventi, Running magazine).

Steve Birkinshaw is a legend within the fell running and ultrarunning communities, both for the extreme distances he can run in the roughest terrain and his ability to push himself to the absolute limit. Born in 1968, he began orienteering by himself at the age of seven. Since then his enthusiasm for running has never diminished, and over forty years later he is still happiest running with a map and compass through bogs and rocks in the wind and rain. He was won many fell races, adventure races and orienteering events, including over twenty wins in the elite class at mountain marathons and victories at the Lakeland 100 and the Dragon's Back Race - the legendary five-day, 300-kilometre run along the mountainous spine of Wales. Steve works for Newcastle University as a hydrologist and has been married to Emma Moody for the past twenty years. They have three children and live near Keswick in the Lake District.