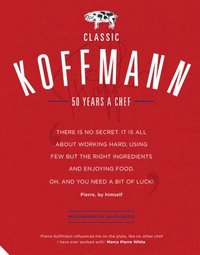 av Pierre Koffmann, David Loftus
Inbunden Engelska, 2016-10-13
369
Köp
Spara som favorit
Winner 'Cooking from a Professional Point of View' - James Beard Foundation Awards 2017 Winner 'Best French Cuisine Book' - Gourmand World Cookbook Awards 2016 Classic Koffmann offers a masterclass in all that's best in the French culinary tradition and will most certainly be the must-have cookery book of the season. There's no doubt that it's Pierre Koffmann, the three Michelin-starred chef, who is the granddaddy of French cuisine in Britain. Now celebrating 50 years in the business, the self-effacing Pierre has been coaxed out of the kitchen just long enough to write this superlative collection of his classic recipes. Ranging as you would expect from Entees to Desserts, and everything in between, Classic Koffmann is a worthy successor to Pierre's Memories of Gascony, which earned him the prestigious Glenfiddich Award in 1990. As if its collection of over 100 star recipes from the master chef wasn't enough, Classic Koffmann is also beautifully illustrated with photography by master photographer, David Loftus. What's more, having been described as 'the chef of chefs' and 'the chef all other chefs look up to', it's no surprise that many of his proteges, the likes of Marco Pierre White, Gordon Ramsey, Bruno Loubet, Tom Aikens, William Curley, Helena Puolakka, Tom Kitchin, Eric Chavot, Paul Rhodes have declared themselves 'honoured' to contribute to this epoch-making book. This younger generation of chefs, who are all culinary luminaries in their own right, have added their own special stories of their training with Pierre, the insights they gained from him and, of course, their paeans of praise for the man who set them on their path in the world of cooking. A masterclass in all that's best in the French culinary tradition.
Visa hela texten

'It's timeless... You'd have a wonderful year - and learn a lot - if you just decided to cook your way through this.' -- Diana Henry * Daily Telegraph * Best Books of 2016 - 'The life's work of OFM's 2016 Lifetime Achievement Award winner, a celebration of an extraordinary 50 years in the kitchen. Here are signature dishes from perhaps the most influential chef in the country, with insights from his proteges.' * The Observer * 'You won't get another man like Koffmann. He walked in and the kitchen went silent. He was completely and utterly in control of everything he did. The things he executed to get flavours out of ingredients were incredible - he made me fall in love with cooking.' -- Tom Kitchin * City AM *

Arriving in Britain in 1970 and expecting to stay only a few months, PIERRE KOFFMANN is still here. Work at Le Gavroche led to his appointment as Head Chef at The Waterside Inn, where he helped the Roux brothers achieve two Michelin stars. In 1977 Pierre opened La Tante Claire in Chelsea, where he introduced Londoners to the Gascon cooking taught to him by his grandmother, Camille. This venture won him three Michelin stars. Pierre's next move was to The Berkeley Hotel in Knightsbridge where, after a brief absence, he returned in 2009. True to his roots, Pierre continues to serve the classic provincial French food that has become his hallmark.