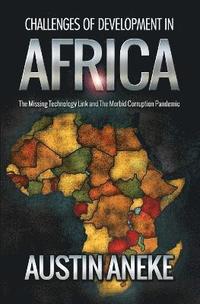 Challenges of Development in Africa

av Austin Aneke, Sarah Davies
Häftad Engelska, 2014-11-01
119
Köp
Spara som favorit
Skickas inom 10-15 vardagar.
Fri frakt inom Sverige över 159 kr för privatpersoner.
Undoubtedly, Africa has experienced its fair share of pains during the process of world development. As it remains the most underdeveloped continent, with disproportionate levels of intimidation, domination and all that goes with underdevelopment, this book attempts to discover why. While even Asia, an ex-colonised part of the world has evolved into tigers, Africa remains the epicentre for bad policies, corruption, financial insolvency, poor governance and poverty.The author recognises that the negative impacts of colonialism on Africa are massive, but voices that ex-colonies like India and other Asian countries appear to be thriving. Moreover, he has analysed meticulously and painstakingly why Africa seems to have become the perpetual underdog vulnerable to exploitation and domination by other continents.Mr Aneke attempts to find answers to Africa's development problems and state of despair by looking critically at the issues of technology and corruption in the continent. The author believes, that 250 years after Industrial Revolution that took place in England in the 18th century, Africa is still not on the world's technology radar. He argues that the diffusion of technological manuscripts to the continent has not reasonably taken place, unlike on other continents. He also links this condition to why the richest continent in terms of natural resources remains the poorest in reality. Consequently, Africa has a lot of catching up to do in this regard. Mr Aneke argues that having a powerful scientific base, technology and/or intellectual property is a precursor for development; and this is neither negotiable nor avoidable. There is no short cut. Any country that wishes to be developed must recreate the Industrial Revolution as a matter of fact, in its own way and time.Conversely, the author argues that Africa is visible in every world corruption index. According to him corruption is extreme and remains a massive threat to African development. It is interesting to note that his concerns with regards to corruption are not only limited to the stealing by corrupt leaders in Africa, but also the recipients of stolen resources abroad. In particular, he did not spare Switzerland which he considers the doyen and chief recipient of stolen resources from Africa. In his view, Switzerland is the world's most prominent producer and repairer of watches but, simultaneously, the most notorious recipient, market and repository for dirty money and other valuables.He argues that corruption must be tackled both at the point of stealing and the point of deposit. Mr Aneke also argues that it is not simplistic to talk about corruption as a major hindrance to development in Africa, because it's at extreme and remains a threat.This is a well-researched work, and a must read for all. I believe that it qualifies as a policy document for the continent. The work does not shy away from the controversial aspects of development in Africa; therefore, it is highly recommended.
Visa hela texten