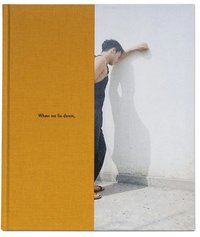 When we lie down, grasses grow from us

av Karolina Gembara
Inbunden Engelska, 2019-11-01
319
Köp
Spara som favorit
Skickas inom 5-8 vardagar.
Fri frakt inom Sverige för privatpersoner.
In 2009 Karolina Gembara moved to Delhi to learn photography and stayed for seven years. When we lie down, grasses grow from us, comprises photographs taken during this period, as Gembara developed a love/hate relationship with the city, borne out of a combination of fascination, homesickness and a feeling of transience. During her time in the city, Gembara moved around frequently and found it difficult to establish a home, or a place where she felt truly comfortable. She met many in a similar position - housing was temporary and even romantic relationships were somehow superficial and makeshift.
Visa hela texten

Karolina Gembara lives and works in Warsaw, Poland. She was based in Delhi from 2009 - 2016 and has been a member of Sputnik Photos since 2018. Her work has been exhibited at PhotoIreland, Dublin (2014), Angkor Photo Festival, Siem Reap (2014), and PhotoKathmandu, Kathmandu (2015), among others. In early 2015 she was nominated for Prix Pictet and later that year she became a finalist of the Valores Humanos contest.