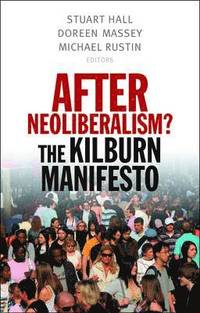 av Stuart Hall, Doreen Massey, Michael Rustin
Häftad Engelska, 2015-02-06
199
Köp
Spara som favorit
Skickas inom 7-10 vardagar.
Fri frakt inom Sverige för privatpersoner.
This books brings together in one volume contributions made to the public debate that has developed around the Kilburn Manifesto, a Soundings project first launched in spring 2013 that seeks to map the political, economic, social and cultural contours of neoliberalism. The manifesto opens with a framing statement that explores the meaning of neoliberalism and introduces the concept of conjunctural analysis. Each chapter then analyses a specific issue or theme. The aim is to call into question the neoliberal order itself, and find radical alternatives to its foundational assumptions.
Visa hela texten

'The Kilburn Manifesto is a fitting testament to the contribution of Stuart Hall to British political life. It presents an incisive and powerful analysis of the current neoliberal moment making it essential reading for anyone interested not only in understanding the present but also in developing strategies for intervening into it.' Professor Alan Finlayson, University of East Anglia

Stuart Hall, Doreen Massey and Michael Rustin were the founding editors of the journal Soundings, in which the theoretical framework of this manifesto was developed. Doreen Massey is Emeritus Professor of Geography at the Open University. Michael Rustin is Professor of Sociology at the University of East London. Stuart Hall was a cultural theorist and most recently Emeritus Professor at the Open University. Stuart died during the development of the manifesto project, but his energy, politics and ideas continue to be the foundation on which the manifesto is based.