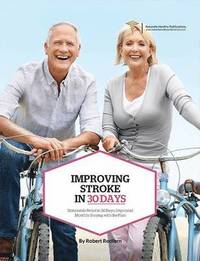 Noticeable Relief in 30 Days, Improved Monthly Staying with the Plan

av Robert Redfern
Häftad Engelska, 2014-10-02
209
Köp
Spara som favorit
'Improving Stroke in 30 Days' published by Naturally Healthy Publications is a health guide designed to improve your stroke symptoms. By following the stroke rehabilitation plan and consistently choosing to follow a naturally healthy lifestyle as recommended inside this book, it's possible to recover after a stroke and to achieve the ultimate goal - long term good health.
Visa hela texten

Robert Redfern is the author and creator of 'The Miracle Enzyme', 'Turning a Blind Eye', 'Mastering Acupuncture' and a series of holistic health books including amongst others, 'Healthier Lungs in 30 Days'. The books cover a wide range of health conditions that can be improved by using natural methods and techniques.

An internationally renowned health coach, author, broadcaster and nutritional formulator, Robert has helped hundreds of thousands of people in over 24 countries through his online health websites, radio interviews and nutritional discoveries.
Robert is also well-known for his work and support of serrapeptase, an enzyme that when ingested helps dissolve blockages in the body, particularly in the arteries.

Robert's interest in health started when he and his wife Anne decided to take charge of their family's health in the late 80's. Up until 1986, Robert did not take much notice of his health - in spite of Anne's loving persuasion. It took the premature death of his parents, Alfred and Marjorie, who died in their 60's, to shock Robert into evaluating his priorities. They looked at the whole field of health, available treatments and the causes of health problems. They found, from doctors researching the causes of disease, that lifestyle and diet were the most important contributions to health.

In addition to improved health, Robert and Anne both look and feel like they have more vitality than they did decades before they started their new health plan. Currently, Robert, 69, and Anne continue to make healthy choices to live energetically and youthfully, by basing their lifestyle on a foundation of natural health.