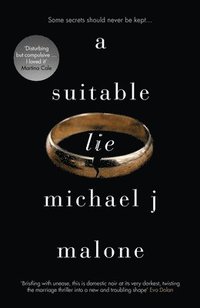 av Michael J Malone
Häftad Engelska, 2016-09-07
119
Köp
Spara som favorit
Finns även som
Visa alla 1 format & utgåvor
Recently widowed and caring for his young son, Andy Boyd thinks his life is over, until he meets the beautiful, enigmatic Anna. And that was his first mistake ... A startling, emotive and stark psychological thriller from one of Scotland's bestselling crime writers... 'A stark, gripping storyline' Scots 'Strong female characters, honest, pithy dialogue and ever-present empathy for the victims make this a deeply satisfying read' Sunday Times 'Vivid, visceral and compulsive' Ian Rankin _________________ Some secrets should never be kept... Andy Boyd thinks he is the luckiest man alive. Widowed with a young child, after his wife dies in childbirth, he is certain that he will never again experience true love. Then he meets Anna. Feisty, fun and beautiful, she's his perfect match ... and she loves his son like he is her own. When Andy ends up in the hospital on his wedding night, he receives his first clue that Anna is not all that she seems. Desperate for that happy-ever-after, he ignores it. A dangerous mistake that could cost him everything. A brave, deeply moving, page-turning psychological thriller, A Suitable Lie marks a stunning departure for one of Scotland's finest crime writers, exploring the lengths people will go to hide their deepest secrets, even if it kills them... _________________ 'Malone tackles the taboo subject of female violence against men with insight and compassion (for Anna is no one-dimensional witch), while creating all the hallmarks of a fine, page-turning psychological thriller' Daily Mail 'A mystery involving some disturbing account anomalies at Andy's bank is appropriately overshadowed by Malone's painful depiction of a man in turmoil' Publishers Weekly 'It's a tough high-wire act, balancing believability with surprise, but the author pulls it off with aplomb. Excellent stuff' Doug Johnstone, The Big Issue 'Disturbing but compulsive ... I loved it' Martina Cole 'Bristling with unease, this is domestic noir at its very darkest, twisting the marriage thriller into a new and troubling shape' Eva Dolan 'A deeply personal thriller that will keep the reader turning those pages, with twists and turns designed to keep the heart pumping' Russel D. McLean 'A tightly wound page-turner with real emotional punch' Rod Reynolds 'A dark and unnerving psychological thriller that draws you deep into the lives of the characters and refuse to let go' Caroline Mitchell 'A chilling tale of the unexpected that journeys right into the dark heart of domesticity' Marnie Riches 'Emotionally intelligent and engaging' Caro Ramsay 'A story that I won't forget in a hurry. Malone is a massive talent' Luca Veste 'A disturbing and realistic portrayal of domestic noir with a twist ... a shocking yet compelling read' Mel Sherratt 'Malone perfectly balances storytelling with a brutal commentary on a dysfunctional relationship' Sarah Ward
Visa hela texten

"Malone tackles the taboo subject of female violence against men with insight and compassion (for Anna is no one-dimensional witch), while creating all the hallmarks of a fine, page-turning psychological thriller." --The Daily Mail "moving." --Publishers Weekly "moving." Publishers Weekly"

Michael Malone is a prize-winning poet and author who was born and brought up in the heart of Burns' country, in Ayr. He has published over 200 poems in literary magazines throughout the UK, including New Writing Scotland, Poetry Scotland and Markings. His career as a poet has also included a (very) brief stint as the Poet-In-Residence for an adult gift shop. Blood Tears, his bestselling debut novel won the Pitlochry Prize (judge: Alex Gray) from the Scottish Association of Writers. Other published work includes: Carnegie's Call (a non-fiction work about successful modern-day Scots); A Taste for Malice; The Guillotine Choice; Beyond the Rage and The Bad Samaritan. His psychological thriller, A Suitable Lie, was a number one bestseller on AU/UK ebook charts, and House of Spines soon followed suit. Michael is a regular reviewer for the hugely popular crime fiction website www.crimesquad.com. A former Regional Sales Manager (Faber & Faber) he has also worked as an IFA and a bookseller. Follow Michael on Twitter @michaelJmalone1