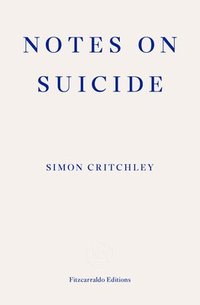 av Simon Critchley
Häftad Engelska, 2015-09-23
139
Köp
Spara som favorit
Skickas inom 3-6 vardagar.
Fri frakt inom Sverige för privatpersoner.
Suicide is everywhere. It haunts history and current events. It haunts our own networks of friends and family. The spectre of suicide looms large, but the topic is taboo because any meaningful discussion must at the very least consider that the answer to the question - 'is life worth living?' - might not be an emphatic yes; it might even be a stern no. Through a sweeping historical overview of suicide, a moving literary survey of famous suicide notes, and a psychological analysis of himself, Simon Critchley offers us an insight into what it means to possess the all too human gift and curse of being of being able to choose life or death.
Visa hela texten

'An elegant, erudite, and provocative book that asks us to reflect on suicide without moral judgment and panicked response. For Critchley, many reasons have been given for suicide, but what remains less remarked is how suicide distinguishes human creatures who grapple with melancholy in the face of losses that are too huge or enigmatic to fathom. Though there may be many reasons given within philosophy or popular culture, there are also some simple, insistent truths that do forestall such an action. In his view, "suicide saddens the past and abolishes the future," establishing a problematic framework for grasping the whole of a life. This text gestures toward what makes us forgetful about suicide: wondrous and recurring moments when we find ourselves "enduring in the here and now."' - Judith Butler

Simon Critchley is Hans Jonas Professor of Philosophy at the New School for Social Research in New York. His previous books include On Humour, The Book of Dead Philosophers, How to Stop Living and Start Worrying, Impossible Objects, The Mattering of Matter (with Tom McCarthy), The Faith of the Faithless, Stay, Illusion!: The Hamlet Doctrine (with Jamieson Webster), Bowie, and Memory Theatre (published by Fitzcarraldo Editions in 2014). He is series moderator of 'The Stone', a philosophy column in the New York Times, to which he is a frequent contributor.