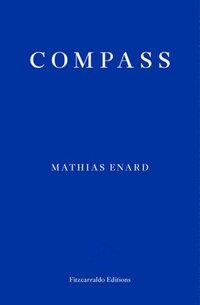 av Mathias Enard
Häftad Engelska, 2017-03-22
174
Köp
Spara som favorit
Finns även som
Visa alla 3 format & utgåvor
As night falls over Vienna, Franz Ritter, an insomniac musicologist, takes to his sickbed with an unspecified illness and spends a restless night drifting between dreams and memories, revisiting the important chapters of his life: his ongoing fascination with the Middle East and his numerous travels to Istanbul, Aleppo, Damascus, and Tehran, as well as the various writers, artists, musicians, academics, orientalists, and explorers who populate this vast dreamscape. At the centre of these memories is his elusive, unrequited love, Sarah, a fiercely intelligent French scholar caught in the intricate tension between Europe and the Middle East. An immersive, nocturnal, musical novel, full of generous erudition and bittersweet humour, Compass is a journey and a declaration of admiration, a quest for the otherness inside us all and a hand reaching out - like a bridge between West and East, yesterday and tomorrow. Winner of the 2015 Prix Goncourt, this is Mathias Enard's most ambitious novel since Zone.
Visa hela texten

'One of the finest European novels in recent memory.' - Adrian Nathan West, Literary Review 'Few works of contemporary fiction will yield as much pleasure as Compass. Reading it amounts to wandering into a library arranged in the form of an exotic sweet shop, full of tempting fragments of stories guaranteed leaving you wanting more.' - Eileen Battersby, Irish Times 'Compass is a challenging, brilliant, and - God help me - important a novel as is likely to be published this year.' - Justin Taylor, Los Angeles Times 'Crisply translated by Charlotte Mandell (as was Zone), Compass is Proustian in its set-up. There are passages of pure delight with rare insight into the human condition.' - Tobias Grey, Financial Times 'The French novelist Mathias Enard is an unusual kind of regionalist. His great subject isn't a small town or neighborhood but the vast Mediterranean basin, and practically everyone within it. Enard speaks Persian and Arabic, and he has taught at universities throughout Europe and the Middle East. He sees the Mediterranean as a distinct literary and historical region, a "zone," as he called it in his novel of the same title. In nine books, three of which have been translated into English, he has charted a course through this zone, writing about sectarian violence in the Balkans; the varying tugs of jihadism, tradition, and globalization in Morocco; and a rogue's gallery of thieves, killers, and eccentrics. Enard's prose, which tends to pile descriptive clauses ever higher on top of one another (Zone is a single, five-hundred-page sentence), can be mesmerizing. But it's the larger project of his writing that bears particular consideration: in his fiction, Enard is constructing an intricate, history-rich vision of a persistently misunderstood part of the world.' - Jacob Silverman, New Yorker 'Enard is like the anti-Houellebecq, and he deserves far more attention.' - Sam Sacks, Wall Street Journal 'The beauty of Compass is the sheer breadth and density of its vision, calling forth a multitude of different worlds, bound only by the capacious mind of its narrator, an aging Austrian musicologist named Franz Ritter.' - Jeffrey Zuckerman, New Republic 'A love letter to the cosmopolitan Middle East ... [a] strangely powerful work.' - Steven Poole, Guardian

Mathias Enard, born in 1972, studied Persian and Arabic and spent long periods in the Middle East. He has lived in Barcelona for about fifteen years, interrupted in 2013 by a writing residency in Berlin. He won several awards for Zone, including the Prix du Livre Inter and the Prix Decembre, and won the Liste Goncourt/Le Choix de l'Orient, the Prix litteraire de la Porte Doree and the Prix du Roman-News for Street of Thieves. He won the 2015 Prix Goncourt, the 2017 Leipziger Book Award for European Understanding, and was shortlisted for the 2017 Man Booker International Prize for Compass.