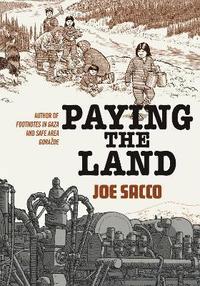 av Joe Sacco
(1 röst)
Inbunden Engelska, 2020-07-16
190
Köp
Spara som favorit
Skickas inom 5-8 vardagar.
Fri frakt inom Sverige för privatpersoner.
Finns även som
Visa alla 1 format & utgåvor
In his first full-length work of journalism in a decade, the 'heir to R. Crumb and Art Spiegelman' (Economist) brings his comics mastery to a story of indigenous North America, resource extraction, and our debt to the natural world *A GUARDIAN BOOK OF THE YEAR* The Dene have lived in the vast Mackenzie River Valley since time immemorial, by their account. To the Dene, the land owns them, not the other way around-it is central to their livelihood and their very way of being. But the subarctic Canadian Northwest Territories are also home to valuable natural resources, including oil, gas and diamonds. With mining came jobs and investment-but also road-building, pipelines and toxic waste, which scarred the landscape; and alcohol, drugs, and debt, which deformed a way of life. In Paying the Land, Joe Sacco travels the frozen North to reveal a people in conflict over the costs and benefits of development. Resource extraction is only part of Canada's colonial legacy: Sacco recounts the shattering impact of a residential school system that aimed to remove the Indian from the child; the destructive process that drove the Dene from the bush into settlements and turned them into wage labourers; the government land claims stacked against the Dene Nation; and their uphill efforts to revive a wounded culture. Against a vast and gorgeous landscape that dwarfs all human scale, Paying the Land lends an ear to trappers and chiefs, activists and priests, telling a sweeping story about money and dependency, loss and culture, with stunning visual detail by one of the greatest comics reporters alive.
Visa hela texten

Joe Sacco...has carved a niche as a comic-book reporter, which is a strange and unusual niche to have. It's one he has made compelling... His drawings often seem more expressive than photojournalism could be, and he does what journalists do: he goes places, keeps his eyes open, talks to people and writes down what they say. * Spectator * Sacco's nuanced interviews and intricate drawings capture an impressive range of voices, each searching for a route forward as the ice melts and old ways fade. -- James Smart * Guardian *Books of the Year* * Urgent and compelling... This is Sacco getting to grips with the story of America itself, the story that America tells itself... Tremendously heartfelt...refreshingly honest...always thoughtful and engaging... We are nothing if not greedy for new Sacco work. * Bookmunch * Paying the Land is Sacco's first full-length work of comics journalism in a decade, and it reminds us of why he is credited as a pioneer of the genre. His combination of authorial and narrative skill and artistic talent still marks him to from many of the cartoonists who have followed in his footsteps. His ability to move between genres and tones, often in consecutive frames, seems to cut across cultures, as his global popularity attests. Comics is a particularly effective mode for Paying the Land, enabling the reader to visualise an unfamiliar landscape and lifestyle. Sacco's artistic ability is particularly striking here, especially in his intensely detailed group scenes. The white page allows him to demonstrate the vast snowy expanses of the land, and to show how it dwarfs human beings. -- Alice Kelly * Times Literary Supplement * A powerful depiction of the painful history of the Northwestern Territory's indigenous people... [Joe Sacco's] comics have earned him comparisons to Hogarth, Art Spiegelman and Robert Crumb... [Paying the Land has] an astonishing sense of place. You can smell rock, pine and snow, feel it in your bones. -- Aida Edemariam * Guardian *Book of the Week* *

Joe Sacco, one of the world's greatest cartoonists, is widely hailed as the creator of war reportage comics. He is the author of, among other books, Palestine, which received the American Book Award, and Safe Area: Gorazde, which won the Eisner Award and was named a New York Times notable book and Time magazine's best comic book of 2000. His books have been translated into fourteen languages and his comics reporting has appeared in Details, The New York Times Magazine, Time, Harper's and the Guardian. He lives in Portland, Oregon.