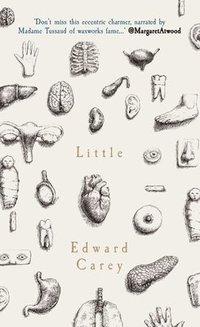 av Edward Carey
Häftad Engelska, 2018-10-01
139
Köp
Spara som favorit
Skickas inom 5-8 vardagar.
Fri frakt inom Sverige över 159 kr för privatpersoner.
Finns även som
Visa alla 4 format & utgåvor
'There is a space between life and death: it's called waxworks' Born in Alsace in 1761, the unsightly, diminutive Marie Grosholtz is quickly nicknamed "Little." Orphaned at the age of six, she finds employment in the household of reclusive anatomist, Dr Curtius. Her role soon surpasses that of mere servant as the eccentric doctor takes an interest in his newfound companion, and begins to instruct her in the fine art of wax modelling. From the gutters of pre-revolutionary France to the luxury of the Palace of Versailles, from clutching the still-warm heads of Robespierre's Terror to finding something very like love, Little traces the improbable fortunes of a bloodstained crumb of a thing who went on to shape the word...
Visa hela texten

'A story wondrous fine, full of terrors and marvels.'--Kirkus, Starred Review 'Iremonger torques and tempers our memories of Dickensian London into a singularly jaunty and creepy tale of agreeable misfits. Read it by gas lamp, with a glass of absinthe at your wrist and a fireplace poker by your knee.'--Gregory Maguire, author of WICKED

Edward Carey was born in Norfolk, England. He is a novelist, visual artist and has also written and directed a number of plays for the National Theatre of Romania and the Vilnius Small State Theatre, Lithuania. In England his plays and adaptations have been performed at the Young Vic Studio, the Battersea Arts Centre, and the Royal Opera House Studio. He is the author of the novels Observatory Mansions, Alva and Irva, and the acclaimed YA series The Iremonger Trilogy, which has been published in thirteen countries and has been optioned for film adaptation. After university, Edward worked at Madame Tussaud in London, preventing people from touching the waxworks, and it was there that he learnt the incredible story of the museum's founder. Edward lives in Austin, Texas in the United States, and teaches at the University of Austin. He is available for interview and to write features.