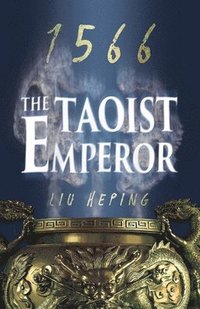 Something is rotten in the heart of the capital

The Ming dynasty is at its zenith. All under heaven bow towards the Forbidden City, where the Celestial Emperor and his servants grace the earth. Yet rot festers deep in the palace?Emperor Jiajing has sealed himself away, more interested in Taoist magics than the Dragon Throne. In his absence, the corruption of ambitious men grows unchecked.

Among such shameless villains stride the Yan, a ruthless clan whose lustful grasp on the state ever tightens. Few dare stand against them, but heaven?s mandate calls for balance, and a humble clerk named Hai Rui rises to answer.

Across land and over water, forces awaken, stirred by the shadows emanating from the halls of power. No one knows if or when the peace of the Great Ming will collapse. Perhaps the cracks can be healed. Perhaps fate can be appeased. Or perhaps the old saying holds true: a realm long united, must divide...
Visa hela texten

Liu Heping was born in Hunan Province, southern China in 1953. He spent his childhood in the theatre and went on to become an acclaimed screenwriter, novelist and historian known for his deep insights into the events of Chinese history. His pioneering historical drama about the Ming dynasty, Da Ming Wang Chao 1566, was first published as a novel in 2006 and sold nearly a million copies. The following year, it was broadcast as a 46-episode TV series that garnered popular and critical acclaim in China. His Chinese Civil War TV drama, All Quiet in Peking, gained a cumulative 400 million online views in the month following its first broadcast in October 2014. The series made waves among China's intellectual circles and was picked up for international distribution by Netflix. Liu's realist approach to the historical and contemporary transformation of China has been hugely influential and well received in the Chinese-speaking world.