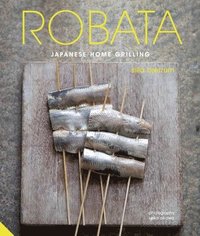 av Silla Bjerrum
Inbunden Engelska, 2018-03-28
269
Bevaka
Spara som favorit
Tillfälligt slut – klicka "Bevaka" för att få ett mejl så fort boken går att köpa igen.
Robata means 'fireside cooking', taking its name from the charcoal grill commonly used in Japan to cook skewers of fish, shellfish, meal and seasonal vegetables, which has a unique impact on flavour. This beautifully-illustrated book introduces you to the art of this Japanese cuisine and teaches you how to cook this way in your own home, whether cooking on an authentic robata grill, your own barbecue or your oven grill. Choose from classic yakitori (chicken cooked on skewers), traditional Japanese fish robata dishes such as Miso Black Cod or a wonderful selection of vegetarian robata dishes. Then choose from the incredible selection of traditional side dishes, pickles and salads to accompany your robata, in this comprehensive cookbook of Japanese slow grilling recipes.
Visa hela texten

Silla Bjerrum fell in love with sushi while working at Chelsea's boutique sushi bar, Nippon Tuk. Silla immediately showed a flair and affinity for the novel cuisine and proceeded to spend several months in the sushi capital Tokyo to hone her skills. Silla co-founded Feng Sushi as a more environmentally sound sushi outlet. On behalf of Feng Sushi, Silla has been awarded the City of London Prize for Sustainability in 2011 and again in 2012 and the SRA's (Sustainable Restaurant Association) Prize for Innovation. Silla is a keen sushi teacher and is a permanent staff member at the excellent Billingsgate Seafood Training School delivering a very popular sushi course on a regular basis. She also teaches regularly at Richard Bertinet's The Bertinet Kitchen, Divertimenti and Leith's School of Food and Wine, and has various corporate clients like Holroyd Howe, Microsoft, Ichiban and Hotel Peponi on Lamu, to name a few. She has participated in various pop-ups, food networks and dinners, the most prestigious of which are the James Beard in New York and The Oxford Food Symposium. Recent events include a charity dinner for the Fishermen's Mission at Melbury House in Dorset and an appearance at the prestigious Feast with a Chef in Bristol.