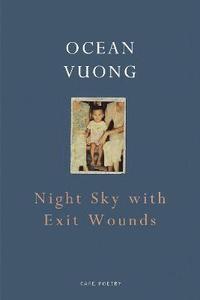 av Ocean Vuong
Häftad Engelska, 2017-04-04
123
Köp
Spara som favorit
Skickas inom 7-10 vardagar.
Fri frakt inom Sverige över 159 kr för privatpersoner.
Kan levereras innan jul!
Finns även som
Visa alla 3 format & utgåvor
Winner of the 2017 T. S. Eliot Prize 'Reading Vuong is like watching a fish move: he manages the varied currents of English with muscled intuition.' New Yorker An extraordinary debut from a young Vietnamese American, Night Sky with Exit Wounds is a book of poetry unlike any other. Steeped in war and cultural upheaval and wielding a fresh new language, Vuong writes about the most profound subjects - love and loss, conflict, grief, memory and desire - and attends to them all with lines that feel newly-minted, graceful in their cadences, passionate and hungry in their tender, close attention: '...the chief of police/facedown in a pool of Coca-Cola./A palm-sized photo of his father soaking/beside his left ear.' This is an unusual, important book: both gentle and visceral, vulnerable and assured, and its blend of humanity and power make it one of the best first collections of poetry to come out of America in years. 'These are poems of exquisite beauty, unashamed of romance, and undaunted by looking directly into the horrors of war, the silences of history. One of the most important debut collections for a generation.' Andrew McMillan Winner of the 2017 Felix Dennis Prize for Best First Collection A Guardian / Daily Telegraph Book of the Year PBS Summer Recommendation
Visa hela texten

Night Sky With Exit Wounds...contains poems of finely pitched, operatic feeling that unpick the violence and fragility of masculinity with wisdom and humour. -- Jeremy Noel-Tod * Sunday Times * Vuong's words writhe and spin - his use of English is astonishing. He's a smelter at his poetry, making words transform into something other than letters and meaning.... His gay love poems are stark, beautiful and utterly unnerving in their uncompromising adoration... A magical journey into Vuong's imagination and talents and an astonishing debut collection. * Gscene * His debut collection, Night Sky With Exit Wounds, is the work of a man with history on his back, even if he has had to imagine some of it into being again. He brings a mythmaker's insistence on being seen and heard to subjects ranging from the death of Telemachus's father, from Homeric myth, to the fall of Saigon and common-or-garden masturbation. -- Claire Armistead * Guardian * His debut collection, praised for its "precise, stark" imagery, can be read both as a personal story - of gay sexuality, absent fathers and hyphenated identities - and as a highly erudite exploration of poetry's possibilities. -- Martin Doyle * Irish Times * Vuong's intimate lyrical voice, his precise, stark imagery and engagement with gay sexuality construct a familiar story of loss... Balancing memory and silence with erudition, Vuong's poetry resists being so easily pinned down... Vuong's poems, written with intelligence and tenderness, offer new spaces for becoming. -- Sandeep Parmar * Guardian * From its opening lines...the book brims with precise, surreal, erotic imagery... Vuong authoritatively lays claim to a range of symbols and tropes... Vuong possesses a large and unusual imagination... Night Sky with Exit Wounds is a remarkable debut. Where Vuong is headed is anyone's guess, but you'll want to go with him. -- Paul Batchelor * New Statesman * His style is not unlike a wall of sounds, a relatively consistent, arrestedly pubescent palette of desire and obsession, turned up high enough to hit the pulse. -- Declan Ryan * Times Literary Supplement * One of the most extraordinary first collections of poems in recent memory... The poems sear through the heart, Vuong finding the words and feelings to capture moments with complete clarity. -- Alex Scott * Cent * If you only read one new book of poetry this year, make it Ocean Vuong's game-changing debut collection. Night Sky With Exit Wounds is breathtakingly beautiful, gut-wrenching and sublime... Phenomenal. * Attitude * Taking war and cultural upheaval in its stride, Night Sky with Exit Wounds is an assured but open debut collection. It's accessible to non-poetry readers while offering sufficient depth to keep the experts engaged. -- Aimee Grant Cumberbatch * Evening Standard * Vuong writes in what may be one of the most unfashionable modes of recent decades, in the richly meditative style of Rainer Maria Rilke. And, almost unbelievably, he does so successfully... Vuong's roomy, cool, risky poems are more than promising, and this is an exciting and compelling book. -- John McAuliffe * Irish Times * Many of the poems in this, Vuong's debut collection, achieve lift-off amid comparable scenes of drama and desperation... This is a book full of promise. -- David Wheatley * Literary Review * The operatic voice of the book is vulnerable and unpredictable. Some of its strongest poems are also the strangest... It is an impressive, uneven, moving book about painful and important subjects - and is the work of a young poet who might, excitingly, say anything next. -- Jeremy Noel-Tod * The Sunday Times * Ocean Vuong is the Walt Whitman of Vietnamese American literature. Lyrical, expansive, sexual, provocative, he sings of the Vietnamese body and of Vietnamese history. -- Viet Thanh Nguyen * Literary Hub * There is a powerful emotional undertow to these poems that springs from Mr Vuong's sincerity and candour, and from his ability to capture spe

Ocean Vuong is the author of the critically acclaimed poetry collection Night Sky with Exit Wounds, winner of the Whiting Award and the T.S. Eliot Prize. His writings have also been featured in The Atlantic, Harper's, The Nation, New Republic, The New Yorker, and The New York Times. In 2019 he was awarded a MacArthur Foundation Fellowship. Born in Saigon, Vietnam, he currently lives in Northampton, Massachusetts, where he serves as an Assistant Professor of English at UMass-Amherst. On Earth We're Briefly Gorgeous is his first novel.