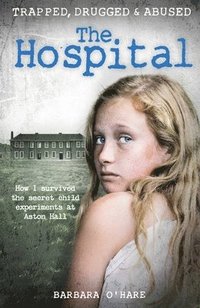 How I survived the secret child experiments at Aston Hall

av Barbara O'Hare
Häftad Engelska, 2017-02-09
99
Köp
Spara som favorit
Fåtal ex i lager. Skickas inom 1-2 vardagar.
Gratis frakt inom Sverige över 159 kr för privatpersoner.
The Sunday Times top ten bestseller... 'Nobody knew what was going on behind those doors. We were human toys. Just a piece of meat for someone to play with.' Barbara O'Hare was just 12 when she was admitted to the psychiatric hospital, Aston Hall, in 1971. From a troubled home, she'd hoped she would find sanctuary there. But within hours, Barbara was tied down, drugged with sodium amytal - a truth-telling drug - and then abused by its head physician, Dr Kenneth Milner. The terrifying drug experimentation and relentless abuse that lasted throughout her stay damaged her for life. But somehow, Barbara clung on to her inner strength and eventually found herself leading a campaign to demand answers for potentially hundreds of victims. A shocking account of how vulnerable children were preyed upon by the doctor entrusted with their care, and why it must never happen again.
Visa hela texten

Barbara O'Hare was admitted to Aston Hall psychiatric hospital when she was 12-years-old, where she was subjected to horrifying courses of 'treatment' from its head physician. Frequently injected with drugs, locked away and abused, Barbara has attempted to come to terms with her time at Aston Hall 46 years on. After creating the Facebook group 'Survivors of Aston Hall', victims have been brought together in their search for answers of how the abuse they suffered came to pass, and was kept secret for so long. Their efforts have led to a major police investigation and a meeting at the Houses of Parliament to have their story heard. Now, more than 100 people have come forward alleging abuse at Aston Hall. This is Barbara's first book, exposing the abuse she suffered at Aston Hall.