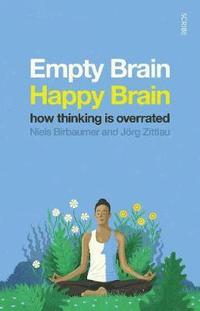 how thinking is overrated

av Niels Birbaumer, Joerg Zittlau
Häftad Engelska, 2019-01-10
169
Köp
Spara som favorit
Kan levereras innan julafton!
Find the happiness of emptiness. Few things scare us more than inner emptiness. The presumed emptiness of coma or dementia scares us so much that we even sign living wills to avoid these states. Yet as Zen masters have long known, inner emptiness can also be productive and useful. We can reach this state through meditation, concentration, music, or even during sex. In fact, our brain loves emptiness - it makes us happy. Leading brain researcher Niels Birbaumer investigates the pleasure in emptiness and how we can take advantage of it. He explains how to overcome the evolutionary attentiveness of your brain and take a break from thinking - a skill that's more important than ever in an increasingly frantic world.
Visa hela texten

Niels Birbaumer is a psychologist and neurobiologist. He is a leading figure in the development of brain-computer interfaces, a field he has researched for 40 years, with a focus on treating brain disturbances. He has been awarded numerous international honours and prizes, including the Gottfried Wilhelm Leibniz Prize and the Albert Einstein World Award of Science. Professor Birbaumer is co-director of the Institute of Behavioural Neurobiology at the University of Tubingen in Germany, and senior researcher at the Wyss Centre for Bio- and Neuro-engineering in Switzerland. Joerg Zittlau is a freelance journalist and writes about science, psychology, and philosophy, among other topics. He is also the author of several bestsellers. David Shaw works as a journalist for Germany's international broadcaster, Deutsche Welle, as well as translating from several languages, including German, Dutch, Russian, and French. He lives in Berlin.