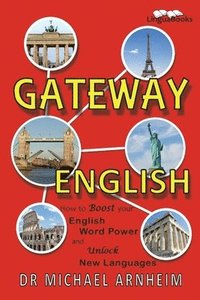 How to Boost your English Word Power and Unlock New Languages

av Dr Michael Arnheim
Häftad Engelska, 2020-08-03
269
Köp
Spara som favorit
Kan levereras innan julafton!
This book will improve your English word power and help you to learn new languages. Dr Arnheim's unique approach shows how English can be used as a gateway to other languages. Taking you on a rollercoaster ride of linguistic discovery, the author guides you through the origins of and interconnections between words you know, words that may be new to you and words you only thought you knew. Vocabulary is the undisputed key to language learning, and the author draws on a wealth of experience and insight to illustrate that the more you know about English words and their origins, the easier it is to study any related language. More than an academic study, more than mere entertainment and more than a conventional language course, Gateway English enables you to boost your English word power and unlock new languages. Features and key selling points: * Boosts your word power. * Unlocks new languages. * Takes you on a rollercoaster ride of language discovery * Dr Arnheim argues that without grammar you cannot speak well, but that without words you cannot speak at all, therefore, words are paramount. * Takes a fresh look at words you know, words you don't know yet and words you only thought you knew... * Uses English as a gateway to other languages. * Offers an entertaining insight into the origins and interconnections of words.
Visa hela texten

Dr Michael Arnheim is a practising London barrister and author of over twenty published books. Educated in the United Kingdom and South Africa, he is an elected Fellow of St John's College, Cambridge, and former Professor of Classics at the University of the Witwatersrand, Johannesburg. Whilst at Cambridge, Dr Arnheim conducted research into a range of topics and taught Classics and Ancient History at a number of colleges. During his time as Head of Classics in Johannesburg, he devised a new system of learning Latin, for which he wrote a series of Latin stories titled "The Adventures of Marcus." He also taught his students Spanish under the title of "Modern Latin," using etymological links with English, along the lines described in this book.