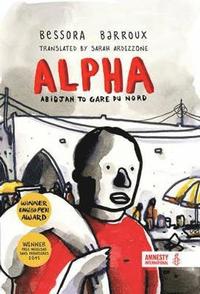 av Bessora
Häftad Engelska, 2016-08-01
159
Bevaka
Spara som favorit
Tillfälligt slut – klicka "Bevaka" för att få ett mejl så fort boken går att köpa igen.
Finns även som
Visa alla 1 format & utgåvor
Alpha Coulibaly is emblematic of the refugee crisis today - just one of millions on the move, at the mercy of people traffickers, endlessly frustrated, endangered and exploited as he attempts to rejoin his family, already in Europe. With a visa, Alpha's journey would take a matter of hours; without one he is adrift for eighteen months. Along the way he meets an unforgettable cast of characters, each one giving another human face to the crisis. The book is presented in graphic novel format, with artwork created in cheap felt-tip pen and wash, materials Alpha himself might be able to access.
Visa hela texten

Bessora is a prize-winning French author of Swiss and Gabonese heritage, deeply committed to telling unheard and suppressed stories. In telling Alpha's story, her aim was to create a strong connection between narrator and reader. She says, "Alpha is like your brother, whispering in your ear. You are very close to him. So anyone can identify with Alpha: he raises the question of destiny. Do we take it in hand? What meaning do we give to our life?" Barroux is a French graphic artist best known as an illustrator for children. He grew up in Morocco and has always wanted to create a book representing contemporary Africa. He settled on Alpha when he met an African refugee in his workplace in Paris. Barroux explains, "His name was - is - Togola and he came to Alice's Garden with no official papers and unable to work although he had been in France for seven years. And I was talking to him and thinking this is so novelistic, you could make such an incredible book out of this man's story."