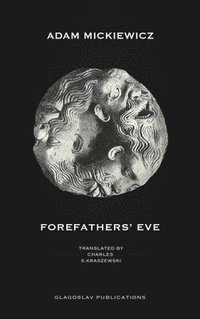 av Adam Mickiewicz
Inbunden Engelska, 2016-11-09
359
Köp
Spara som favorit
Skickas inom 10-15 vardagar.
Fri frakt inom Sverige för privatpersoner.
Finns även som
Visa alla 2 format & utgåvor
Forefathers' Eve [Dziady] is a four-part dramatic work begun circa 1820 and completed in 1832 - with Part I published only after the poet's death, in 1860. The drama's title refers to Dziady, an ancient Slavic and Lithuanian feast commemorating the dead. This is the grand work of Polish literature, and it is one that elevates Mickiewicz to a position among the "great Europeans" such as Dante and Goethe. With its Christian background of the Communion of the Saints, revenant spirits, and the interpenetration of the worlds of time and eternity, Forefathers' Eve speaks to men and women of all times and places. While it is a truly Polish work - Polish actors covet the role of Gustaw/Konrad in the same way that Anglophone actors covet that of Hamlet - it is one of the most universal works of literature written during the nineteenth century. It has been compared to Goethe's Faust - and rightfully so. Forefathers' Eve initiated the great contribution of Poland to world theatre: Monumental Drama, which stretches from him through Stanislaw Wyspianski to Tadeusz Kantor in our own day and age. The present translation of Adam Mickiewicz's Forefathers' Eve is the first complete verse translation of the cycle published in English. It has been put to use in its entirety by the Teatr Polski in Wroclaw, and partially set to music by Arturas Bumšteinas in his contemporary orchestral work Different Trains (2014). Translated by Charles S. Kraszewski. Charles S. Kraszewski (b. 1962) is a poet, translator and literary critic. He has published three volumes of original verse: Beast (Alexandria, 2013), Diet of Nails (Boston, 2013) and Chanameed (Atlanta, 2015). Among his critical works is Irresolute Heresiarch: Catholicism, Gnosticism and Paganism in the Poetry of Czeslaw Milosz (Newcastle-on-Tyne, 2012); many of his verse translations are collected in the volume Rossetti's Armadillo (Newcastle-on-Tyne, 2014). This book was published with the support of the Hanna and Zdzislaw Broncel Charitable Trust. This book has been published with the support of the ©POLAND Translation Program. Maxim Hodak - (Publisher), Max Mendor - (Director), Ksenia Papazova (Managing Editor).
Visa hela texten

Adam Mickiewicz (1798-1855) is the national poet of Poland. He was successful in every genre at which he tried his hand, setting the benchmark for excellence in poetry, prose and drama for all the writers that came after him. His lyric poems, collected in Ballads and Romances [Ballady i romanse, 1822], ushered in the Romantic Movement in Polish literature. His Erotic and Crimean Sonnets [Sonety miosne and Sonety krymskie, 1826] form one of the most accomplished cycles in that demanding form since Petrarch. His narrative poems, Konrad Wallenrod (1828) and Grayna (1823), reveal his sustained mastery with longer poetic genres. Mickiewicz's epic in twelve cantos, Pan Tadeusz (1834), is universally recognized as Poland's national epic, as well as the last Vergilian epic written in Europe.

Prose occupies a rather minor niche in Mickiewcz's corpus of writings. The quasi-Biblical Books of the Polish Nation and Polish Pilgrimage [Ksigi narodu i pielgrzymstwa polskiego, 1832] put the English reader in mind of a more practicable William Blake. With their socially and politically-applied Christianity, Mickiewicz had an appreciable influence on the thought of his friend, Lammenais. Finally, his Cours de litterature slave professe au College de France, delivered during his exile in Paris, and published posthumously in 1860, is one of the first balanced and comprehensive accounts of the Slavic traditions in literature and culture to meet Western eyes.

It is impossible to assess the importance of Adam Mickiewicz to the Polish consciousness. During the period of the Partitions, which lasted from 1795 until 1918, Poles looked to Mickiewicz for the guidance that political figures could not supply them. He died in exile, trying to raise troops in Turkey for the Polish independence struggles.