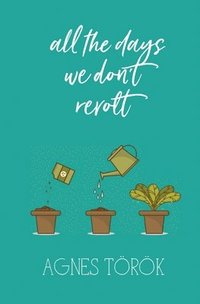 All The Days We Don't Revolt

av Agnes Torok
Häftad Engelska, 2020-03-25
219
Köp
Spara som favorit
Skickas inom 7-10 vardagar.
Gratis frakt inom Sverige över 159 kr för privatpersoner.
Award-winning poet, TED speaker and activist Agnes Toeroek writes with hope and hilarity, exhaustion and empathy about the need to get out of bed and pay the bills and fall in love and over-water the pot plans - all while the revolution needs you. Poetry about all the things we do all those days we aren't campaigning, marching or petitioning. About how we love, how we care, how we create. And how these things give us the resilience to keep resisting. How all that care gives us the strength to keep making the world a better place.
Visa hela texten

'This book is a glorious rallying cry ... this is poetry of vibrancy and soul and a joy to read ' Salena Godden 'Reading all the days we don't revolt, I found moments of recognition that felt like a hug after a long day. There are a lot of things Agnes puts into words - deftly - that I didn't know I needed to recognise. That kind of honesty and compassion is what we need to take care of each other and, in doing so, change the world.' Linden Katherine McMahon

Agnes Toeroek is an award-winning poet, internationally-touring spoken word artist and double TED speaker. She has toured on four continents and writes and performs in two languages. Toeroek's work exists at the intersection of arts and activism, and she performs as often in fancy theatres as at crammed and freezing protests. Previous collaborations include trade unions, organisations to end sexual violence, mental health organisations, BBC, Films for Action, Dangerous Women Project and Upworthy. She also produces new work and performs with her band SheSpokeSound and feminist poetry collective Det Nya Gardet (The New Guard, Swedish). Her previous books, Happiness is an Art Form (about mental ill-health) and We Need to Talk (about sexual violence and how to end it) are published by Burning Eye Books. Both engaged with campaigning organisations and donated part of proceeds to support services for mental health and sexual violence survivors respectively. She believes in putting her words into action and in taking care of each other within social movements. In having your birthday cake and your revolt too, if you like.To read more about Agnes, follow her on social media and crowdfunded projects www.agnestorok.org www.patreon.com/AgnesTorokPoet