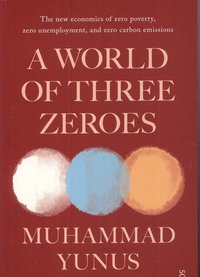 A World of Three Zeroes

av Muhammad Yunus
Häftad Engelska, 2018-11-29
129
Köp
Spara som favorit
Skickas inom 7-10 vardagar.
Fri frakt inom Sverige över 159 kr för privatpersoner.
Kan levereras innan jul!
Finns även som
Visa alla 1 format & utgåvor
A Nobel Peace Prize-winner outlines his radical economic vision for a better future. Muhammad Yunus is the economist who invented microcredit, founded Grameen Bank, and earned a Nobel Peace Prize for his work towards alleviating poverty. Here, he proposes his vision for a new kind of capitalism, where altruism and generosity are valued as much as profit making, and where individuals not only have the capacity to lift themselves out of poverty, but also to affect real change for the planet and its people. A World of Three Zeroes offers a challenge to young people, business and political leaders, and ordinary citizens everywhere to improve the world for everyone before it's too late.
Visa hela texten

'The book has a lotto like and Yunus's faith in the entrepreneurial spirit is uplifting. His focus is on communities in developing countries but with lessons for everyone, and a wealth of ideas.' * In The Black * 'A book to make Wall Street quake - if Wall Street paid attention to the developing world ... The author's humane proposal for economic reform, far from impractical, makes for provocative reading for development specialists.' * Kirkus Reviews *

Muhammad Yunus, born in Bangladesh, was educated at Dhaka University and was awarded a Fulbright scholarship to study economics at Vanderbilt University. In 1972, he became head of the economics department at Chittagong University. He is the founder of Grameen Bank and the father of microcredit, an economic movement that has helped lift millions of families around the world out of poverty. He is also the creator of the 'social business' model. Yunus and Grameen Bank are winners of the 2006 Nobel Peace Prize.