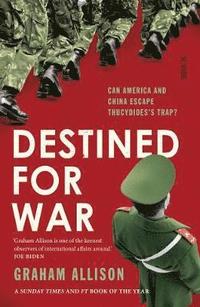 av Graham Allison
Häftad Engelska, 2018-09-13
128
Köp
Spara som favorit
Skickas inom 7-10 vardagar.
Fri frakt inom Sverige över 159 kr för privatpersoner.
A Sunday Times and FT Book of the Year When a rising power threatens to displace a ruling one, the most likely outcome is war. In this razor-sharp analysis, Harvard scholar Graham Allison examines the phenomenon known as Thucydides's Trap, which is currently playing out between the world's two biggest superpowers: the US and China. Through uncanny historical parallels, Destined for War shows how close we are to the unthinkable. Yet, stressing that war is not inevitable, Allison also reveals how clashing powers have kept the peace in the past - and what painful steps international leaders can and must take to avoid disaster.
Visa hela texten

'[A] brief but far-reaching book in which potted history is incisively deployed ... One of the many strengths of Destined for War is the restoration of the late Samuel Huntington's 'Clash of Civilisations' theory, disparaged in the mid-1990s but subliminally gaining force by the day. Mr. Allison approvingly paraphrases Huntington's notion that 'the Western myth of universal values' is 'not just naive but inimical to other civilisations, particularly the Confucian one with China at its centre.' -- Robert D. Kaplan * <i>The Wall Street Journal</i> * '[A]rgue[s] persuasively that adjusting to this global power shift will require great skill on both sides if conflagration is to be avoided ... helpfully illustrated with maps and charts...with wide-ranging, erudite case studies that span human history ... this fine book show[s] that China intends to evict the United States from Asia in order to restore its dominance over what it considers its historic spheres of influence. Unfortunately, Washington is poorly prepared to deal with a China that strategises in terms of the symbolic undercurrents and sensitivities illuminated so dramatically by Allison.' -- Judith Shapiro * <i>The New York Times Book Review</i> * 'As a single volume on the shape of the gathering rivalry and co-operation between the United States and China, this book is to be highly recommended. It is clearly written with a popular audience in mind. As such it can join the ranks of a number of such books that explain a wide range of complex concepts and historical episodes in a way that the layperson can readily engage with.' * NZ International Review * 'Thought-provoking and very readable.' * The Sunday Times * 'Surely another classic in the making, Destined for War is a brilliant example of 'thinking in time,' which - as the author shows - is against us.' -- Brendan Simms * author of <i>Europe: The Struggle for Supremacy</i> * 'Graham Allison has been a source of inspiration for me as a student and diplomat. As with Essence of Decision, Destined for War again provides us with his penetrating insights into global politics in the 21st century and beyond.' -- Ban Ki-Moon * former Secretary General of the United Nations * 'If any book can stop a world war, it is this one. This gripping book is a must read for policy makers in both nations as well as the general public.' -- Sam Nunn 'Reading Destined for War and drawing from its lessons could help to save the lives of millions of people.' -- Klaus Schwab 'Destined for War is a must-read for anyone concerned about US-China relations. A gifted combination of scholarship with truly accessible writing.' -- Amitai Etzioni 'Essential, even indispensable reading for every diplomat-and financier or businessman - that contemplates China and its relations with the world.' -- Kurt Campbell 'Graham Allison is the Paul Revere of the nuclear age. In his brilliant book, Allison provides us with a heart stopping look into a future that may end as abruptly as the past began.' -- William Cohen 'Graham Allison has written the most important foreign policy book of our time.' -- Sandy Winnefeld 'For policymakers, scholars, and citizens on both sides of the Pacific Ocean, Destined for War is essential reading.' -- Ash Carter 'Graham Allison has written a gripping book that decision-makers and citizens alike must read, digest, and act upon.' -- Samantha Power 'An important new book.' * Financial Times * 'Do China and America want war? No. Might they be compelled into conflict by severe structural stress? Yes. Thankfully, Allison charts an essential course to avoid a catastrophic collision. Destined for War will be studied and debated for decades.' -- Kevin Rudd * former Prime Minister of Australia * 'A provocative thesis on one of today's most pressing foreign policy issues and a page turner of the first order, Destined For War is a must read. Professor Allison writes with the propulsive narrative drive approp

Graham Allison is director of Harvard University's Belfer Center for Science and International Affairs and the bestselling author of Lee Kuan Yew, Nuclear Terrorism, and Essence of Decision. Founding dean of the Kennedy School of Government, he has advised the secretaries of defense under Reagan, Clinton, and Obama.