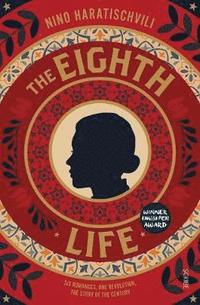 (for Brilka) The International Bestseller

av Nino Haratischvili
Häftad Engelska, 2019-11-14
189
Köp
Spara som favorit
Skickas inom 7-10 vardagar.
Fri frakt inom Sverige för privatpersoner.
Finns även som
Visa alla 2 format & utgåvor
LONGLISTED FOR THE BOOKER INTERNATIONAL PRIZE Six romances, one revolution, the story of the century. 'That night Stasia took an oath, swearing to learn the recipe by heart and destroy the paper. And when she was lying in her bed again, recalling the taste with all her senses, she was sure that this secret recipe could heal wounds, avert catastrophes, and bring people happiness. But she was wrong.' At the start of the twentieth century, on the edge of the Russian Empire, a family prospers. It owes its success to a delicious chocolate recipe, passed down the generations with great solemnity and caution. A caution which is justified: this is a recipe for ecstasy that carries a very bitter aftertaste ... Stasia learns it from her Georgian father and takes it north, following her new husband, Simon, to his posting at the centre of the Russian Revolution in St Petersburg. Stasia's is only the first in a symphony of grand but all too often doomed romances that swirl from sweet to sour in this epic tale of the red century. Tumbling down the years, and across vast expanses of longing and loss, generation after generation of this compelling family hears echoes and sees reflections. Great characters and greater relationships come and go and come again; the world shakes, and shakes some more, and the reader rejoices to have found at last one of those glorious old books in which you can live and learn, be lost and found, and make indelible new friends.
Visa hela texten

'It's definitely the best work of fiction I've read in the last year.' -- John Leake * Novel Bookstore * 'Once I finished this amazing family tale, the gold is worn off the cover in places, but the memories that made for a story told well will remain with me. I felt part of this family as I traveled with them through time and history; as they shared with me all the threads of their woven carpet, generations old ... I loved this amazing book.' -- Shannon Alden * Literati Bookstore * 'Georgia, a picturesque nation squeezed between the Caucasus Mountains and the Black Sea, was once considered a wine-soaked playground for the Soviet upper crust. This multigenerational epic, framed as a gift from the embittered narrator, Niza, to her wayward niece, provides a more nuanced view. It begins with Niza's bourgeois great-grandmother, whose dream of becoming a ballerina is derailed by Lenin's revolution. Her descendants are likewise transformed by upheavals of the twentieth century: Stalinist purges, the Second World War, the Prague Spring, Georgia's independence, and the subsequent civil war. Through these events, the novel offers not only a critique of Soviet and Russian imperial ambitions but a necessary reappraisal of Georgian history.' * The New Yorker * 'Something rather extraordinary happened. The world fell away and I fell, wholly, happily, into the book ... My breath caught in my throat, tears nestled in my lashes ... devastatingly brilliant.' -- Wendell Steavenson * The New York Times Book Review * 'The Eighth Life is the saga of a Georgian family - its intricate, interconnected lives, its losses, triumphs, sadnesses, and great loves, set against the sweep of Russian history across the twentieth century ... an unforgettable, rich and textured piece of literature.' -- Georgia Brough * Readings * 'Sometimes I wonder how many people harbour a secret desire to write a book about their family's entire history. I have certainly met enough women in my life who have expressed this explicitly, especially the stories shared by their mothers and grandmothers-the implication being that we don't get enough of these stories in literature or biographies. It is perhaps for this reason that reading Nino Haratischwili's The Eighth Life, translated by Charlotte Collins and Ruth Martin, feels so familiar, almost like a wish fulfilled ... The Eighth Life has deservedly been compared to Tolstoy's War & Peace.' -- Barbara Halla * Asymoptote * '[T]his sprawling epic of love and loss ... The Eighth Life is an expansive and hopeful tale centred on family touched by war and revolution.' * Foreword Reviews * 'The Eighth Life is capacious, voluble, urgent, readable, translated heroically and sparklingly by Charlotte Collins and Ruth Martin.' -- Julian Evans * Stuff * 'The scope is Tolstoyan: the drama of War and Peace, the emotion of Anna Karenina ... A sprinkling of Allendesque magic realism is added, along with a handful of spirits and a secret recipe for delicious and addictive hot chocolate that appears to curse those who drink it.' -- Lizzy Siddal * The Riveter * 'Spanning six generations of a family between 1900 and the 21st century, its characters travel to Tbilisi, Moscow, London and Berlin in an epic story of doomed romance that combines humour with magic realism.' -- Marta Bausells * The Guardian, 'Ten of the best new books in translation' * 'This multi-award winning novel is a riveting read ... You too often want to pause and appreciate delightful twists, intriguing concepts, the catch-your-breath unexpected.' -- Judith Armstrong * The Australian * 'This novel has generated substantial industry buzz and international critical praise. Both are justified ... The Eighth Life - the story of a family, a country, a century - is an imaginative, expansive, and important read.' STARRED REVIEW * Booklist * '[A]n exceptional, deeply evocative saga of an elite Georgian family as they endure the 20th century's political upheavals, from before the Bolshevi

Nino Haratischvili was born in Georgia in 1983, and is an award-winning novelist, playwright, and theatre director. At home in two different worlds, each with their own language, she has been writing in both German and Georgian since the age of twelve. In 2010, her debut novel Juja was nominated for the German Book Prize, as was her most recent Die Katze und der General in 2018. In its German edition, The Eighth Life was a bestseller, and won the Anna Seghers Prize, the Lessing Prize Stipend, and the Bertolt Brecht Prize 2018. It is being translated into many languages, and has already been a major bestseller on publication in Holland, Poland, and Georgia. Charlotte Collins studied English Literature at Cambridge University, and worked as an actor and radio journalist in Germany and the UK before becoming a literary translator. She received the Goethe-Institut's Helen and Kurt Wolff Translator's Prize in 2017 for Robert Seethaler's A Whole Life, which was also shortlisted for the Man Booker International Prize and the International Dublin Literary Award. Her other translations include Seethaler's The Tobacconist and The End of Loneliness by Benedict Wells. Ruth Martin has a PhD in German literature and philosophy from the University of London. Her recent translations include Volker Weidermann's Dreamers, Michael Koehlmeier's novels Two Gentlemen on the Beach and Yiza, short fiction by Joseph Roth, and essays by Hannah Arendt. She has taught translation to undergraduates at Birkbeck and the University of Kent, and is currently co-chair of the Society of Authors Translators Association.