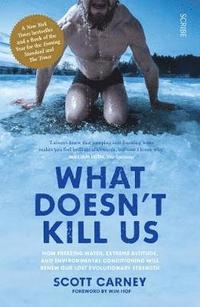 What Doesn't Kill Us

av Scott Carney
(2 röster)  |  Läs 2 recensioner
Häftad Engelska, 2019-01-10
129
Köp
Spara som favorit
A New York Times bestseller and a Book of the Year for the Evening Standard and The Times. Is getting a little less comfortable the key to living a happier, healthier life? When journalist Scott Carney came across a picture of a man in his fifties sitting on a glacier in just his underwear, he assumed it must be a hoax. Dutch guru Wim Hof claimed he could control his body temperature using his mind and teach others to do the same. Sceptical, Carney signed up to Hof's one-week course, not realising that it would be the start of a four-year journey to unlock his own evolutionary potential. From hyperventilating in a Polish farmhouse to underwater weight training in California, and eventually climbing Mt Kilimanjaro wearing just shorts and running shoes, Carney travelled the world testing out unorthodox methods of body transformation and discovering the science behind them. In What Doesn't Kill Us he explains how getting a little less comfortable can help us to unlock our lost evolutionary strength.
Visa hela texten

'[Wim Hof] has become a phenomenon, and Carney is an entertaining guide to his world and his followers.' * The Times 'Book of the Week' * 'I always knew that jumping into freezing water makes you feel brilliant afterwards, but now I know why.' -- William Leith * The Spectator * 'When it's cold outside, do you turn the heating up? Do you always put a coat on before going out? Do you think your comfortable life is good for you? If so, you have to read Scott Carney's What Doesn't Kill Us. Through some great stories - which often involve Carney in the snow without much on - and some serious research, he shows us how to escape the bland, shuffling gait of our centrally-heated, fleece-jacketed, molly-coddled lives by diving head first into the ice-cold, axe-sharp, scary experiences that made our ancestors' hearts beat faster every day. If we do that, we can awake from the dull slumber of modern life, and open our eyes to a better, healthier dawn of crisp air, better circulation, and the ability to truly mean it when we say: I'm alive. Buy this book, and you'll emerge a stronger, healthier, more human human.' -- James Wallman * author of <i>Stuffocation: Living More With Less</i> * 'Climbing a mountain in nothing but a pair of shorts seems idiotic to most, but for Wim Hof and his companions, it's just another day. When investigative journalist and anthropologist Carney heard about Hof's mind-boggling methods and claims that he could 'hack' the human body, he knew he had to venture to Poland to expose this fraud. But in just a few days, Hof changed Carney's mind, and so began a friendship and a new adventure. Carney now chronicles his journey to push himself mentally and physically using Wim Hof's method of cold exposure, breath-holding, and meditation to tap into our primal selves. Our ancestors survived harsh conditions without modern technology, while we live in comfortable bubbles with little to struggle against and wonder how they survived. The question is, 'What happens when we push our bodies to the limit?' Carney calls on evolutionary biology and other modern scientific disciplines to explore and explain Hof's unconventional methods. Fresh and exciting, this book has wide appeal for readers interested in health, sports, self-improvement, and extreme challenges.' * Booklist * 'As this engaging autoethnography relates, anthropologist and investigative journalist Carney was skeptical upon encountering a photo of a nearly naked Wim Hof sitting on a glacier in the Arctic Circle. Hof, a Dutch fitness guru who runs a training camp in Poland's wilderness, claims he can control his body temperature and immune system solely with his mind; though Carney set out to prove Hof a charlatan, he was instead won over. Carney documents his interactions with Hof and the many others who have learned to control their bodies in seemingly impossible ways: he learned Hof's breathing techniques for tricking the body into doing things it isn't evolutionarily designed for, and underwent training to face extreme cold while barely clothed. It is this training that enables Hof and Carney to summit Mt. Kilimanjaro in 28 hours while wearing shorts. This is part guide and part popular science book; readers will learn about how Neanderthals used the body's 'brown fat' to keep warm and how exposure nearly reverses the symptoms of diabetes. The accomplishments Carney documents are unbelievable and fascinating; this isn't a how-to for those looking to perform extraordinary feats, but it is an entertaining account that will appeal to the adventurous.' * Publishers Weekly * 'Scott Carney is so curious about getting to the truth of things that he is willing to endure great pain and suffering to get there. While investigating the controversial methods of Wim Hof and others operating on the scientific fringe, Carney entered a skeptic yet emerged a true believer. In What Doesn't Kill Us, readers get to follow him along on his transformational journey, and th

Scott Carney is an award-winning investigative journalist and anthropologist whose stories blend narrative nonfiction with ethnography. His reporting has taken him to some of the most dangerous and unlikely corners of the world. He is a senior fellow at the Schuster Institute for Investigative Journalism and a fellow at the Center for Environmental Journalism at the University of Colorado Boulder. He is the author of The Red Market and A Death on Diamond Mountain, and has been a contributing editor at Wired. Other works of his have appeared in Mother Jones, Foreign Policy, Playboy, Details, Discover, Outside, and Fast Company, among other publications. He lives in Denver with his wife, Laura, and their cat, Lambert.