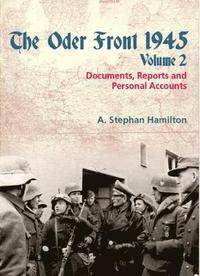 av A Stephan Hamilton
Häftad Engelska, 2017-08-15
489
Bevaka
Spara som favorit
Tillfälligt slut – klicka "Bevaka" för att få ett mejl så fort boken går att köpa igen.
Finns även som
Visa alla 1 format & utgåvor
The Oder Front 1945 Volume II breaks new ground in its operational level detail of the German defense of the Oderfront between January-May 1945. Volume II pieces together the various orders, directives, and command guidance issued by the Fuhrer, OKW, OKH and Heeresgruppe Weichsel commanders to examine who drove military decisions and how they shaped Germany's final defense in the east. Previous works have placed significant blame for the failures of Heeresgruppe Weichsel to defend Pomerania on the shoulders of its first commander Reichsfuhrer-SS Heinrich Himmler. While Himmler's lack of professional military training did have an adverse effect on military operations, documents reveal that Heinz Guderian, Chief of OKH, was responsible for issuing the orders that led to many of the costly offenses and overall lack of preparedness in the defense of Pomerania. Guderian, and not Himmler, was responsible for the hastily executed Operation Sonnenwende, the withdrawal of key combat formations from the frontline in Pomerania just before the Soviet assault, and the desperate attack plans out of the Altdamm and Frankfurt-an-der-Oder Bridgeheads that led to confusion and dismay among the commanders of the 3.Panzer-Armee and 9.Armee. Driving Guderian's often desperate decision-making was his military intelligence Chief, Reinhard Gehlen, whose assessments of Soviet intentions increasingly pitted him against the Fuhrer's "intuition" ultimately leading to Guderian's dismissal at the end of March-a week after Himmler left command. The first 60 days of the Oderfront's defense were squandered between competing personalities that battled for influence over the Reich's most important military command at that time. In the final analysis, Himmler did achieve the main goal that Adolf Hitler expected with his appointment to commander of Heeresgruppe Weichsel; to reestablish discipline and order among the defeated and demoralized Wehrmacht formations fleeing west in the wake of the January Soviet Vistula-Oder Strategic Offensive. However, even draconian punishment could not create new formations where none existed. What prevented the rapid collapse of the Oderfront in the winter of 1945 was the Wehrmacht's Wehrkreis system that continued to ingeniously field new combat formations into the frontline against all expectations. Both OKW and OKH worked tirelessly to resurrect defeated combat formations and field new ones at a time when not a single German combat division existed between Berlin and the Soviet Bridgehead at Kienitz on the Oder River in early February 1945. Using extensive primary documents and first person accounts The Oder Front 1945 Volume II details all the main combat operations on the Oderfront from the Fortresses of Graudenz, Thorn, Posen, Schneidemuhl, Kustrin, and Kolberg, to Operation Sonnenwende, the Altdamm and Schwedt Bridgeheads and the final battles of the 3.Panzer-Armee, 9.Armee, 12.Armee, and 21.Armee. Every aspect of Heeresgruppe Weichsel's formation and military readiness is detailed and analyzed through primary documents; from its manpower to allocated weapons, fuel and ammunition supply, to replacements and leadership. All major combat formations are detailed to include their late war order-of-battle and operational history. Included in this second volume of the series are hundreds of translated documents and orders, more than 30 charts and tables, and over 35 color maps. This work is an excellent companion to Volume I and fills an important gap in the history of German military operations during the last months of the war.
Visa hela texten

If read in combination with Helion's Soviet General Staff account of Operation Berlin, we now have superb accounts of a decisive campaign, providing a wargamer's dream...Outstanding material." *Winner of the 'Miniature Wargames Recommends' award for January 2018* * Miniature Wargames - Chris Jarvis *