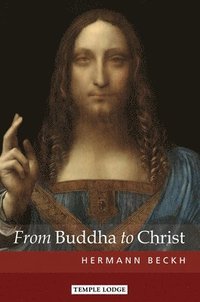 From Buddha to Christ

av Hermann Beckh
Häftad Engelska, 2019-03-25
159
Köp
Spara som favorit
Skickas inom 5-8 vardagar.
Fri frakt inom Sverige över 159 kr för privatpersoner.
Many people who are drawn to Buddhism today are seeking for spiritual knowledge as opposed to simple faith or sectarian belief. Hermann Beckh had a profound personal connection to the Buddhist path and the noble truths it contains, yet he was also dedicated to a radical renewal of Christianity. Assimilating the groundbreaking research of Rudolf Steiner (1861-1925), Beckh's comprehension of Buddhism was neither limited to historical documents nor scholarly research in philology. Rather, from his inner meditation and spiritual understanding, he saw the earlier great world religions as waymarks for humanity's evolving consciousness. In the modern world, the apprehension of Christianity needed to be grounded firmly in a universally-valid, inner cognition and experience: `In this light, knowledge becomes life.' Hermann Beckh - Professor of Tibetan Studies and Sanskrit in Berlin, subsequently a founding priest of The Christian Community - first published this mature study in 1925. Having already produced the comprehensive Buddha's Life and Teaching in 1916, Beckh's sweeping perspectives combined with his extensive academic knowledge provided a unique grounding for authoring this work. As he notes, From Buddha to Christ follows a path of development, `both of method and goal'. Thus, studying this book is itself a path of knowledge and potential initiation. Beckh's universal insights remain relevant - and if anything have gained in value - to twenty-first century readers. This edition features an additional essay, `Steiner and Buddha: Neo-Buddhist Spiritual Streams and Anthroposophy' (1931), in which Beckh, for the first and last time, explains his lifelong personal connection to the Buddhist path. `Christianizing the Buddha's impulse at the same time broadens the Christian horizon...' - Hermann Beckh
Visa hela texten

HERMANN BECKH (1875-1937) studied Law and later Sanskrit, becoming Professor of Oriental Studies at the University of Berlin. A master of ancient and modern languages, he wrote extensively on religious and philosophical subjects, including Buddhism, Indology, Christianity, Alchemy and Music. In 1911, he heard a lecture by Rudolf Steiner and was inspired to join the Anthroposophical Society, where he was a valued co-worker. In 1922, he helped found The Christian Community, a movement for religious renewal. His many books are gradually being translated from the original German and published in English.

Preface - I. The Tree of Knowledge and the Tree of Life - II. The Gospel of Birth and Death: The Knowledge of Repeated Lives on Earth and of the Law of Destiny - III. Knowledge: The Four Noble Truths and the Twelve Causes - IV. The Path - Appendix: Steiner and Buddha (Neo-Buddhist Spiritual Streams and Anthroposophy)