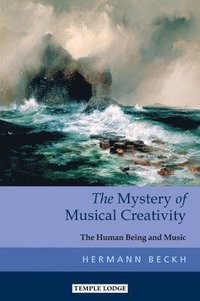 The Mystery of Musical Creativity

The Human Being and Music

av Hermann Beckh
Häftad Engelska, 2019-11-06
179
Köp
Spara som favorit
Skickas inom 5-8 vardagar.
Fri frakt inom Sverige för privatpersoner.
Lost for decades, the manuscript of Hermann Beckh's final lectures on the subject of music present fundamentally new insights into its cosmic origins. Beckh characterises the qualities of musical development, examines select musical works (that represent for him the peak of human ingenuity), and throws new light on the nature and source of human creativity and inspiration. Published here for the first time, the lectures demonstrate a distinctive approach founded on the raw material of musical perception. Beckh discusses the whistling wind, the billowing wave, the song of the birds and particularly the theme of longing. Never losing the ground from under his feet, he penetrates perennial themes: from the yearning for real spontaneity and the 'Mystery background' uniting heaven and earth, to spiritual knowledge that can meet the demands of the twenty-first century. Out of the cosmic context, Beckh writes to the individual situation. From there, he seeks again the re-won cosmic context. He does not write as a musical specialist and then turn to universal human concerns; rather, Beckh writes from universal human concerns and reveals music as of special concern to everyone. In addition to the transcripts of fifteen lectures, this book contains a valuable introduction and editorial footnotes. It also features appendices including Beckh's essay 'The Mystery of the Night in Wagner and Novalis'; reminiscences of Beckh by August Pauli and Harro Ruckner; Donald Francis Tovey's 'Wagnerian harmony and the evolution of the Tristan-chord', and several contemporaneous reviews of Beckh's published works.
Visa hela texten

HERMANN BECKH (1875-1937) studied Law and later Sanskrit, becoming Professor of Oriental Studies at the University of Berlin. A master of ancient and modern languages, he wrote extensively on religious and philosophical subjects, including Buddhism, Indology, Christianity, Alchemy and Music. In 1911, he heard a lecture by Rudolf Steiner and was inspired to join the Anthroposophical Society, where he soon became a valued co-worker. In 1922, he helped found The Christian Community, a movement for religious renewal. His many books are gradually being translated from the original German and published in English.

Introduction by Alan Stott - The Human Being and Music - 1. The Polarity of the Musical Element: the Airy and the Sound-Etheric (the Earthly and the Cosmic Element) - 2. The Two Elements as the Soul and the Spirit of Music. The Two Biblical Creation Stories. The Human Soul-Air. The Fall of Man - 3. The Two Elements in the Music from Bach to Beethoven and Chopin. The Earthly Element - Dust. The recent Epoch of Music - 4. The Two Elements of Music as 'Wind and Wave'. Strindberg's The Dream Play. Mozart, Beethoven and Chopin - 5. The Union of both Elements in the Theme of Longing in Tristan and Isolde - 6. The Motif of Longing in Tristan and Isolde - 7. The Primordial Root va - 'blowing', and the Experience of Pain. The Hibernian Mysteries. The Magic of the Mother. The Christian Mystery and Parsifal - 8. Parsifal. The Starry Quality. Karfreitagszauber and the Liebestod. A 'Super-Tonal' Style. Bruckner's Ninth Symphony. Planets, Stars and the Musical Keys - 9. The Trinity of Instruments: Strings, Woodwind and Brass in Wagner and Bruckner - 10. The Mystery of Death in Tristan and Isolde and Bruckner's Ninth Symphony. The Key of D-minor - 11. Earthly and Cosmic Music. Strindberg's The Dream Play - 12. Novalis. Nature and the Musical Element. The Mastersingers. Beethoven's Pastoral Symphony - 13. The Life of Initiation. Opera and the Musical Future. Novalis and the Musical 'Homeland'. Wagner and 'not music'. Opera and Absolute Music. Mystery Back-grounds. Tannhauser - 14. Mystery Contexts in Wagner. The Mystery of Human Life; Prophecy, Fulfilment and the Future - 15. The Christian Mystery dramatised in Music - Appendix One: Hermann Beckh: The Mystery of the Night in Wagner and Novalis - Appendix Two: August Pauli: Memories of Hermann Beckh. Harro Ruckner: A Memory of Hermann Beckh - Appendix Three: Donald Francis Tovey: Wagnerian harmony and the [possible] evolution of the Tristan-chord. Chopin's Mazurka, op. 68, no. 4, bb. 11-14 - Appendix. Book Reviews: Hermann Beckh: Buddha's Life and Teaching, Hermann Beckh The Parsifal=Christ=Experience in Wagner's Music Drama. Hermann Beckh: The Language of Tonality in the Music of Bach to Bruckner. Christoph Peter: The Language of Music in Mozart's 'The Magic Flute' - Notes - Bibliography