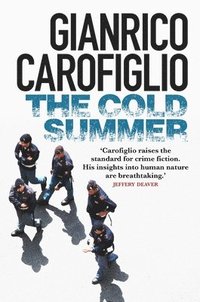 av Gianrico Carofiglio
Häftad Engelska, 2018-05-17
115
Köp
Spara som favorit
Skickas inom 7-10 vardagar.
Gratis frakt inom Sverige över 159 kr för privatpersoner.
The summer of 1992 had been exceptionally cold in southern Italy. But that's not the reason why it is still remembered. On May 23, 1992, a roadside explosion killed the Palermo judge Giovanni Falcone, his wife and three police officers. A few weeks later judge Paolo Borsellino and five police officers were killed in the center of Palermo. These anti-mafia judges became heroes but the violence spread to the region of Bari in Puglia, where we meet a new, memorable character, Maresciallo Pietro Fenoglio, an officer of the Italian Carabinieri. Fenoglio, recently abandoned by his wife, must simultaneously deal with his personal crisis and the new gang wars raging around Bari. The police are stymied until a gang member, accused of killing a child, decides to collaborate, revealing the inner workings and the rules governing organised crime in the area. The story is narrated through the actual testimony of the informant, a trope reminiscent of verbatim theatre which Carofiglio, an ex-anti-mafia judge himself, uses to great effect. The gangs are stopped but the mystery of the boy's murder must still be solved, leading Fenoglio into a world of deep moral ambiguity, where the prosecutors are hard to distinguish from the prosecuted.
Visa hela texten

Praise for Carofiglio: "The author occupies a niche similar to Erle Stanley Gardner and John Grisham. The genre is flourishing and Carofiglio has endowed his hero with a discriminating taste for good food, but none of their relish for brutality. Violence is kept at arm's length." Times Literary Supplement "As exacting and contemplative as any crime writer I can think of. Yet when the Italian defence lawyer isn't doing something, he is thinking, and what goes on in his doubt-stuffed head is always captivating. "Washington Post "Hard-boiled and sun-dried in equal parts. Where Philip Marlowe would be knocking back bourbon and listening to the snap of fist on the jaw, Guerrieri prefers Sicilian wine and Leonard Cohen. " Financial Times "The role of Guerrieri is to take on impossible cases that have little chance of success. His efforts to prove his client's innocence bring him into dangerous conflict with Mafia interests. Everything a legal thriller should be." The Times "Written with brio, humour and skill. Guerrieri is a lawyer who struggles with his own demons as much as with his stressful caseload. It sometimes feels as though he's the only honest lawyer in Bari." Daily Mail KIRKUS: "Carofiglio's engaging main character. Fenoglio is a sensitive, polished figure who has managed to keep his idealism intact in a career meant to break it; he is as comfortable philosophizing as he is citing the public safety code. When he recalls a joke about a drunkard searching for his keys under a streetlight rather than in the dark street where he lost them, he realizes his search is failing for the same reason: "We look where it's light, even though that's exactly how not to solve the problem." Solving this case, Carofiglio shows us, requires a leap into the darkness. PW: This is sure to win Carofiglio, a former prosecutor who specialized in organized crime, a wider U.S. audience. CrimeTime: Who better to tell you how the Mafia works than the man who in real life was an Italian prosecutor and advisor to the government's anti-Mafia Committee? This at times meditative book teaches us much about gangland's childish rituals and Italian police procedure but still racks up some tension before its realistic conclusion. It's a book for adult readers, about gangsters who are little more than viscously bad boys.

Gianrico Carofiglio is one of Italy's bestselling authors. He was previously a member of the Italian Senate and before that, an anti-Mafia prosecutor in Bari, a port on the coast of Puglia. He has been involved with trials concerning corruption, organised crime and the traffic in human beings. He has written a number of highly acclaimed crime novels and other literary fiction.