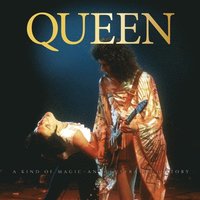 Queen A Kind Of Magic

av Michael O'Neill
Inbunden Engelska, 2018-10-01
229
Köp
Spara som favorit
Skickas inom 5-8 vardagar.
Fri frakt inom Sverige för privatpersoner.
Queen are one of the biggest stadium rock bands in the world. "Another One Bites the Dust" (1980) became their best-selling single, while their 1981 compilation album Greatest Hits is the best-selling album in the UK and is certified eight times platinum in the US. Their record sales range from 150 million to 300 million records, making them one of the world's best-selling music artists. They were inducted into the Rock and Roll Hall of Fame in 2001. In 2018 they were presented the Grammy Lifetime Achievement Award.
Visa hela texten

Michael A. O'Neill is a writer and actor who trained at the Central School of Speech and Drama in London. For many years he wrote scripts for historical documentaries, which he also produced and narrated; these have been shown worldwide on a variety of TV channels such as the Discovery Channel and the History Channel.He has written many best selling books including a biography of Frank Sinatra.