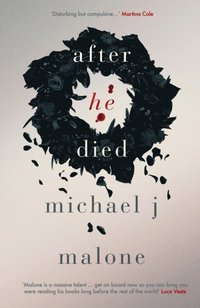 After He Died (e-bok)

av Michael Malone
E-bok (EPUB - DRM), Engelska, 2018-07-15
59
Ladda ned
Spara som favorit
Laddas ned direkt
Läs i vår app för iPhone, iPad och Android
Finns även som
Visa alla 1 format & utgåvor
When a strange woman slips a note into grieving widow Paula's pocket at her husband's funeral, everything suggests that he was not all that he seemed ... A devastatingly moving, explosive psychological thriller from the international bestselling author of A Suitable Lie.'Disturbing but compulsive ... I loved it' Martina Cole'Bristling with unease, this is domestic noir at its very darkest, twisting the marriage thriller into a new and troubling shape' Eva Dolan'Vivid, visceral and compulsive' Ian Rankin_________________You need to know who your husband really was...When Paula Gadd's husband of almost thirty years dies, just days away from the seventh anniversary of their son, Christopher's death, her world falls apart. Grieving and bereft, she is stunned when a young woman approaches her at the funeral service, and slips something into her pocket. A note suggesting that Paula's husband was not all that he seemed...When the two women eventually meet, a series of revelations challenges everything Paula thought she knew, and it becomes immediately clear that both women's lives are in very real danger.Both a dark, twisty slice of domestic noir and taut, explosive psychological thriller, After He Died is also a chilling reminder that the people we trust the most can harbour the deadliest secrets..._________________Praise for Michael J. Malone'Gripping and suspenseful fare that reinforces Malone's renown for producing psychological thrillers' Herald Scotland'It's a tough high-wire act, balancing believability with surprise, but the author pulls it off with aplomb. Excellent stuff' Doug Johnstone, The Big Issue'Michael J Malone has portrayed this beautifully and managed to get the balance just right ... A well-paced, excellent read' Promoting Crime'After he Died is a fantastic read packed with engaging characters and a compelling narrative' CrimeSquad'An explosive tale, one that takes hold, bites, and doesn't let go' LoveReading'A stark, gripping storyline' Scots'A fine, page-turning thriller' Daily Mail'Original, engrossing and scary' The Times'Brilliantly creepy' Daily Record'Genuinely shocking' Crime by the Book'Delightfully disturbing' Chapter in My Life'Michael Malone has a way of telling a story that just leaves you more than a little disturbed yet breathless with admiration' Live & Deadly'Enthralling, wonderful, intense, full of suspense and twists that had my head in a spin! Crime Book Junkie'Michael J. Malone is quickly making his way up my list of favourite authors' Always Trust in Books
Visa hela texten