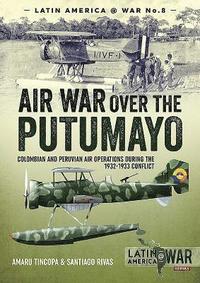 Air War Over the Putumayo

Colombian and Peruvian Air Operations During the 1932-1933 Conflict

av Amaru Tincopa, Santiago Rivas
Häftad Engelska, 2018-05-15
199
Bevaka
Spara som favorit
Tillfälligt slut – klicka "Bevaka" för att få ett mejl så fort boken går att köpa igen.
During 1932, the occupation of the Colombian towns of Leticia and Tarapaca by Peruvian troops and civilians, in the Amazon region, led to a conflict that almost ended in a total war between both countries. Aviation played an important role on both sides, due to the complicated jungle environment, which makes any land movements almost impossible. After some ground and air combats, a ceasefire was agreed and the conflict was resolved. But the war over the Putumayo area became the baptism of fire for the Peruvian and Colombian air forces, leading, in the second case, to the development of its military aviation, which was almost non-existent in 1932. For Peru, the result of the conflict was also a rearming process, which proved important when in 1941 it entered into war with Ecuador. This book is supported by a large number of rare and previously unpublished images, and specially commissioned colour profiles showing camouflage and markings.
Visa hela texten

Born in Lima, Peru, in August 1977, Amaru Tincopa began his involvement in aviation history in 1998. Since then he has produced 9 books, over 30 articles and collaborated on others in both magazines and books around the world. He is a permanent contributor to several Peruvian and foreign defence journals and magazines. Focused on early Peruvian military aviation history, he manages the country's leading vintage aviation archive which collaboratively provides data and material to local publications, media and researchers. He currently resides in Lima. Santiago Rivas was born in Buenos Aires, Argentina, in 1977 and graduated in journalism. Since 1997 he has worked in aviation and defence journalism, travelling all across Latin America to research for articles and books. In 2007 he published his first book, about the Malvinas/Falklands War for a Brazilian publisher and since then, another eighteen titles have published in Argentina, Brazil, France, Germany, Austria and the United Kingdom, with others still to be released. He has also published articles in more than fifty magazines in twenty countries and currently works for more than twenty of them. He has three children and lives in Buenos Aires, travelling extensively within Latin America to fulfil his research work.