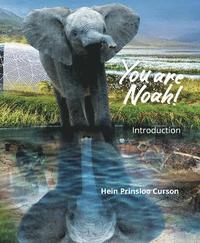 You are Noah!: Introduction

av Hein Prinsloo Curson
Inbunden Engelska, 2021-10-30
179
Bevaka
Spara som favorit
Ännu ej utkommen – klicka "Bevaka" för att få ett mejl så fort boken boken går att köpa.
Finns även som
Visa alla 1 format & utgåvor
This intends to be the most ambitious conservation project in history. Incorporating advanced research as well as Jurassic strength and security, the future 100-square kilometres conservation park landscape lies on the North-East coast of KwaZulu Natal, South Africa. Eco-tourism will be at the heart of its sustainability. The park's aquarium will be the biggest sea life centre in the world. While massive Eden-project-like Geo Domes, built using smart glass and sophisticated climate control systems, will provide ecosystems for animals from other continents whilst under the South African sun. Noah's Ark, a response to the ecosystem crisis our planet faces, is intended to show the way for many more to follow. Yes, we are taking more notice of climate change also recycling and prioritising renewable energy. Plus, especially now with Covid-19 restrictions, people are reconnecting with nature. All of which is raising awareness to the overriding need for a world-saving solution. The initial challenge for the project team, led by Richard & Hein Prinsloo-Curson, is to inspire YOU and all those who want to save our planet and all our precious fellow creatures, to activate a massive change in environmental policies worldwide. * The Noah's Ark Foundation is a non-profit organisation set up to manage the ark and support global projects which prevent deforestation, pollution, hunting and animal poaching.
Visa hela texten

As a small child Hein lived alongside some of the world's most notable wild animals - zebras, giraffes, elephants, cheetahs and more. The second youngest of four brothers he was taught to respect animals and in childhood played in the wild as if a young Tarzan, he recalls, understanding their survival from the earth and trees and developing his care for the natural world. His father worked for the South African Gold Mines and the family was not well off. They moved to another life in Pretoria when he was a 12-year-old. After finishing school Hein's first job was in Furniture Retail Operations, in which he grew to become a regional manager. However, his passion for nature also grew. He spent weekends trekking in the bush, camping under the stars and being as close to wildlife as possible. He also befriended game ranger Peta Janice Smith, from Cape Town. She was, Hein felt, a kind of Doctor Doolittle often nursing injured animals back to health. When he met Richard Curson the couple were united in their love of animals and a passion to preserve the natural world. A gay couple, they also married, an event witnessed on TV's hit celebrity show Top Billing. Soon the concept of Noah's Ark was born and the pair began to nurture their vision towards reality. From the outset, Peta was with their project. Today, she is Noah's Ark animal expert.